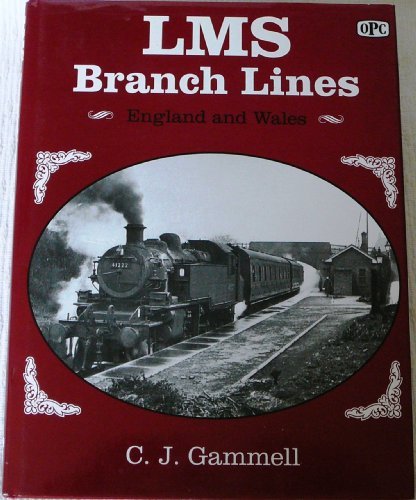 Synopsis: The London, Midland and Scottish Railway existed from 1923 until 1947 and during that time was the largest company in Britain. The railway even claimed to be the largest company in the world as it employed nearly 250,000 people and had a capital value of #400 million. The LMS had an amazing collection of minor railways with some of its branch lines dating back to the dawn of the railway age. The Bolton & Leigh and the Cromford & High Peak Railways, for example, were built by canal engineers and had steep, cable worked inclines. On another line there was a busy passenger terminus with a frequent train service that was never featured in a public timetable or shown on a map. Closures of branch lines started during the 20th century, some ceasing to function during World War I and others during the 1930s. Many cross-country lines disappeared during the 1970 period and today few traditional rural branch lines exist. Many of the closed lines have been converted to footpaths or cycleways and a number of stations have now been purchased and restored to their former glory. Each of the lines described in this book, including what remains to be seen of many of them today.

Book Description OPC Railprint, 1991. Hardcover. Condition: Good. Previous owners name inside the front page Good condition is defined as: a copy that has been read but remains in clean condition. All of the pages are intact and the cover is intact and the spine may show signs of wear. The book may have minor markings which are not specifically mentioned. Most items will be dispatched the same or the next working day. Seller Inventory # wbb0012387242

Book Description OPC Railprint, 1991. Hardcover. Condition: Used; Good. Dispatched, from the UK, within 48 hours of ordering. This book is in good condition but will show signs of previous ownership. Please expect some creasing to the spine and/or minor damage to the cover. Ripped/damaged jacket. The dust jacket of this book is slightly damaged/ripped, however, this does not affect the internal condition. Seller Inventory # CHL5279181

Book Description OPC Railprint, 1991. Hardcover. Condition: Used; Acceptable. Ex-library. Dust jacket is damaged. Page colour - ?discoloured in accordance with book age. **Simply Brit** Shipped with Premium postal service within 24 hours from the UK with impressive delivery time. We have dispatched from our book depository; items of good condition to over ten million satisfied customers worldwide. We are committed to providing you with reliable and efficient service at all times. Seller Inventory # 2976106

Book Description Hardback. Condition: Very Good. The book has been read, but is in excellent condition. Pages are intact and not marred by notes or highlighting. The spine remains undamaged. Seller Inventory # GOR001881274

Book Description Hardback. Condition: Good. The book has been read but remains in clean condition. All pages are intact and the cover is intact. Some minor wear to the spine. Seller Inventory # GOR002952360

Shipping: US$ 2.61
From United Kingdom to U.S.A.
Destination, rates & speeds