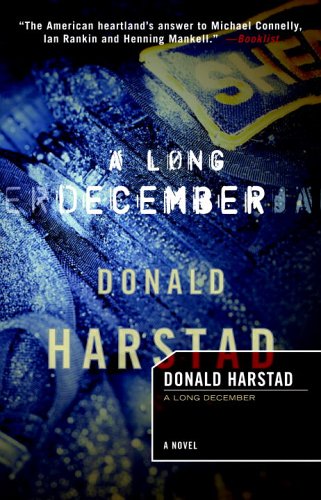 The people of Nation County, Iowa–a heartland town straight out of a
Coen Brothers movie or a John Cougar Mellencamp song–practice a
unique brand of American stoicism. You betcha. And they rely upon
their public servants to shield them from the horrors of the outside
world. Carl Houseman, deputy sheriff of the 750-square-mile county,
dedicates his life to keeping his citizenry so secure that you can leave
the door unlocked at home and walk his streets with a big hello and a
smile to every stranger.  On Houseman’s watch, the mounting terrors
of the new world order stay far away.

But December 2001 could change all of that. Outsiders are everywhere.
The meat plant is now kosher and there are more Jewish fellows per
capita than any other place in the country. Hispanic and other foreign
workers, with dubious immigration papers, have taken jobs from the
locals. Eighteen other languages are now spoken within the tiny region,
and Carl and company can’t speak a single one.

Then the eighty-odd-year-old Heinman brothers’ call comes in from
their farm down in Frog Hollow.  They’ve witnessed an execution-style
killing not one hundred yards from their pig feeders. The victim’s awful
dead and half his head’s been blown off. The boys haven’t seen nothing
like it since Normandy. When Carl gets to the scene, he believes them.

What follows is a masterful police procedural thriller–think Joe
Wambaugh crossed with Fargo–written with a singular and authentic
voice that has electrified readers around the world.

About the Author: Donald Harstad is a twenty-six year veteran of the Clayton County Sheriff's Department in northeastern Iowa where he was a former deputy sheriff. He is the author of three earlier crime stories featuring Carl Houseman: ELEVEN DAYS, THE KNOWN DEAD and THE BIG THAW.

Book Description Rugged Land, 2005. Condition: Good. Shows some signs of wear, and may have some markings on the inside. Seller Inventory # GRP67824662

Book Description Rugged Land, 2005. Condition: Good. Ships from Reno, NV. Former Library book. Shows some signs of wear, and may have some markings on the inside. Seller Inventory # GRP113751594

Book Description Rugged Land. Paperback. Condition: Very Good. A copy that has been read, but remains in excellent condition. Pages are intact and are not marred by notes or highlighting, but may contain a neat previous owner name. The spine remains undamaged. At ThriftBooks, our motto is: Read More, Spend Less. Seller Inventory # G1590710401I4N00

Book Description Rugged Land, 2005. Paperback. Condition: Acceptable. 2005. Paperback. 317 pages. Rugged Land. Some surface/edge wear to cover. Pages are good. - Disclaimer: May have a different cover image than stock photos shows, as well as being a different edition/printing, unless otherwise stated. Please contact us if you're looking for one of these specifically. Your order will ship with FREE Delivery Confirmation (Tracking). We are a family business, and your satisfaction is our goal!. Seller Inventory # mon0000112081

Book Description Rugged Land, 2005. Condition: Good. A+ Customer service! Satisfaction Guaranteed! Book is in Used-Good condition. Pages and cover are clean and intact. Used items may not include supplementary materials such as CDs or access codes. May show signs of minor shelf wear and contain limited notes and highlighting. Seller Inventory # 1590710401-2-4