Items related to Lord of the Flies (50th Anniversary Edition) 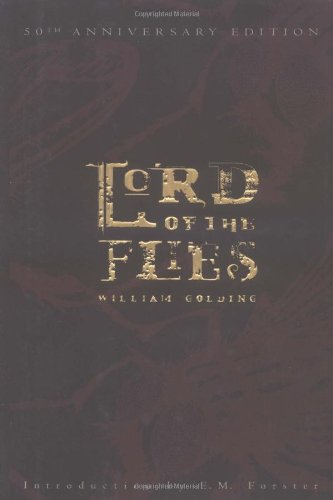 The 50th Anniversary Edition of the Lord of the Flies is the volume that every fan of this classic book will have to own!

Lord of the Flies remains as provocative today as when it was first published in 1954, igniting passionate debate with its startling, brutal portrait of human nature. Though critically acclaimed, it was largely ignored upon its initial publication. Yet soon it became a cult favorite among both students and literary critics who compared it to J.D. Salinger's The Catcher in the Rye in its influence on modern thought and literature.

Labeled a parable, an allegory, a myth, a morality tale, a parody, a political treatise, even a vision of the apocalypse, Lord of the Flies has established itself as a true classic. And now readers can own it in a beautifully designed hardcover edition worthy of its stature.

William Golding's classic tale about a group of English schoolboys who are plane-wrecked on a deserted island is just as chilling and relevant today as when it was first published in 1954. At first, the stranded boys cooperate, attempting to gather food, make shelters, and maintain signal fires. Overseeing their efforts are Ralph, "the boy with fair hair," and Piggy, Ralph's chubby, wisdom-dispensing sidekick whose thick spectacles come in handy for lighting fires. Although Ralph tries to impose order and delegate responsibility, there are many in their number who would rather swim, play, or hunt the island's wild pig population. Soon Ralph's rules are being ignored or challenged outright. His fiercest antagonist is Jack, the redheaded leader of the pig hunters, who manages to lure away many of the boys to join his band of painted savages. The situation deteriorates as the trappings of civilization continue to fall away, until Ralph discovers that instead of being hunters, he and Piggy have become the hunted: "He forgot his words, his hunger and thirst, and became fear; hopeless fear on flying feet." Golding's gripping novel explores the boundary between human reason and animal instinct, all on the brutal playing field of adolescent competition. --Jennifer Hubert