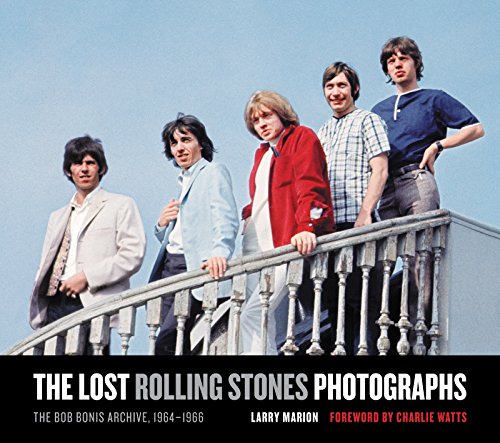 2010. First Edition. Hardcover. Features the photos of the Rolling Stones band, showing band members in intimate shots on stage, in rehearsal, in concert, backstage (tuning up, waiting to go on stage and clowning around), dressing and relaxing, on vacations or en route to shows or cities, getting haircuts, bowling, recording in the studio, and at press events. Num Pages: 288 pages, Illustrations. BIC Classification: AJC; AVGP; AVH. Category: (G) General (US: Trade). Dimension: 236 x 264 x 27. Weight in Grams: 1364. . . . . . Books ship from the US and Ireland. Bookseller Inventory # V9780061960796

Synopsis: Features previously unpublished images of the iconic rock-and-roll band during their first American tour as captured by their former manager, in a trove that includes numerous candid photographs of the band sharing personal moments behind the scenes. 25,000 first printing.

A revealing look at the earliest days of the legendary band, captured in a collection of personal, never-before-seen photographs—the largest single trove of such important rock images ever uncovered

When they first came to America in June of 1964, The Rolling Stones had been together for only two years and were almost completely unknown to U.S. audiences. They often played on bills with a variety of other artists, not necessarily as the headlining act, and often received lukewarm receptions. Many of these earliest U.S. shows did not sell out. But in the years that Bob Bonis photographed them, The Stones went from unknowns to one of the most prominent bands in the world.

Documented in these photos is this seminal period when The Stones made their transformation into the world's greatest rock 'n' roll band. And during that time, few were closer to The Stones than Bob Bonis, the tour manager for their U.S. tours between 1964 and 1966. While on the road with The Stones, Bonis, a passionate amateur photographer with a keen eye, an innate sense of composition, and a deep love for his subjects, snapped some 2,700 photographs of the band—a remarkable collection that until now has only been known to family and close friends.

Onstage, offstage, and behind-the-scenes, these stunning photographs show The Stones in an entirely new light—intimate and unguarded. Here are Mick Jagger, Keith Richards, Brian Jones, Charlie Watts, Ian Stewart, and Bill Wyman in casual moments, in rehearsal, in concert, in dressing rooms, on vacation, on the road. Funny, surprising, provocative, beautiful, these photos recall an unforgettable period in history and offer a fresh look at these soon-to-be legends at the beginning of their fame. This was the point at which early manager Andrew Loog Oldham began to position the band as the antidote to The Beatles—troublemakers dressed in leather and singing about the dark side of relationships.

Comprised of images unearthed after forty-five years, The Lost Rolling Stones Photographs is a groundbreaking portrait of one of the most iconic bands of the twentieth century.

Book Description Condition: Good. Cover has some rubbing and edge wear. Access codes, CDs, and other accessories may not be included. All items ship Mon-Fri. Seller Inventory # 2Y6JCK001HD3

Book Description HarperCollins Publishers. Hardcover. Condition: Very Good. A copy that has been read, but remains in excellent condition. Pages are intact and are not marred by notes or highlighting, but may contain a neat previous owner name. The spine remains undamaged. An ex-library book and may have standard library stamps and/or stickers. At ThriftBooks, our motto is: Read More, Spend Less. Seller Inventory # G0061960799I4N10

Book Description imusti, 2018. Hardcover. Condition: VERY GOOD. Pages are intact and are not marred by notes or highlighting, but may contain a neat previous owner name. The spine remains undamaged. Seller Inventory # 0061960799_abe_vg

Book Description Dey Street Books, 2018. Condition: Good. A+ Customer service! Satisfaction Guaranteed! Book is in Used-Good condition. Pages and cover are clean and intact. Used items may not include supplementary materials such as CDs or access codes. May show signs of minor shelf wear and contain limited notes and highlighting. Seller Inventory # 0061960799-2-4

Book Description It Books, 2010. Hardcover. Condition: Good. Connecting readers with great books since 1972. Used books may not include companion materials, some shelf wear, may contain highlighting/notes, may not include cdrom or access codes. Customer service is our top priority!. Seller Inventory # S_265953418

There are 20 more copies of this book