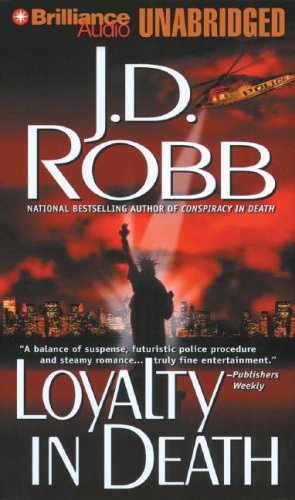 Eve Dallas Returns to Face Her Most Ingenious Foe―a "Secret Admirer" Who Taunts Her With Letters...And Kills Without Mercy

An unknown bomber is stalking New York City. He is sending Eve Dallas taunting letters promising to wreak mass terror and destruction among the "corrupt masses." And when his cruel web of deceit and destruction threatens those she cares for most, Eve fights back. It's her city...it's her job...and it's hitting too close to home. Now, in a race against a ticking clock, Eve must make the pieces fit―before the city falls.

Review: In 21st-century New York City, tough-as-nails cop Eve Dallas can survive a bombing, seduce her husband, and outsmart a terrorist--all on four hours of sleep. In this latest installment of the In Death series, author J.D. Robb (a.k.a. Nora Roberts) casts our heroine against an enigmatic group of terrorists named Cassandra. With no clear motivation or demands, Cassandra feeds on the thrill of senseless killing and the calculated destruction of Eve's world.

Relying on her own brawn and brains, as well as that of her aid Peabody and her husband Roarke, Eve begins to unravel a mystery that began decades before. When the killer's threats land close to home, Eve knows she has no choice but to gamble her own life for the chance to save her city as well as her loved ones.

J.D. Robb's combinations of mystery, suspense, and romance keep the fans of this series clamoring for more, and Loyalty in Death has equal amounts of each. While the passion between Eve and Roarke is as good as ever, the introduction of a new romantic element certainly turns up the heat and is a welcome twist. Though the evil-terrorist-in-NYC theme has been done before (most recently in The Siege), these beloved characters put up a good fight, and keep us glued to the pages. --Nancy R.E. O'Brien