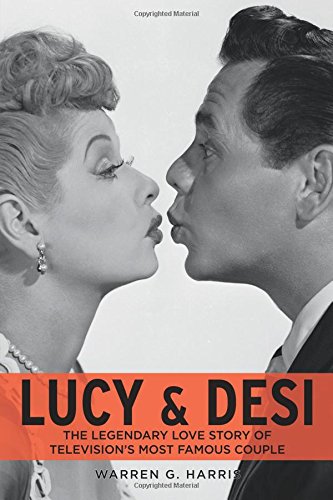 Synopsis: After eight years on the air, Desi Arnaz did not love Lucy any more. On screen, they were dynamite-a comedy pairing more successful than any Hollywood had ever produced. But when the cameras stopped rolling, they fought, screamed and threatened each other more each season. Finally, an argument in Desi's production office turned violent. Lucy hurled a cocktail glass past his head, and Desi demanded a divorce. He moved out that night. After nearly twenty years, America's favorite couple was finished. When they first got married, no one in Hollywood thought it would last six months. Lucille Ball's acting career was on the skids, and Arnaz was just another Cuban bandleader. But together, their irresistible chemistry produced one of the greatest television empires of all time, and a love story as passionate as it was explosive.

From Kirkus Reviews: Dual biography of Lucy and Desi by the author of Natalie & R.J.: A Hollywood Love Story (1988), Cary Grant: A Touch of Elegance (1987), etc. Despite his stylelessness, Harris performs a thorough job on the lives of TV's greatest comedy team, although he does not offer complete cast listings, show dates, or titles. What he does capture well is Desi's solemn patience as he explains things to Lucy: Desi's Cuban tones enliven every page he's on--but then so does Lucy's amused tolerance with Desi. The two first met in the RKO commissary when Desi was a bombshell Broadway success at 23 and Lucy at 29 was grinding out six musicals a year. Lucy grew up in a suburb of Jamestown, N.Y., where she became known as the ``Jamestown hussy'' because of her raccoon coat and flapper's galoshes. After a few ``missing years,'' about which there are dark hints, she landed a job as a Goldwyn Girl at MGM. Meanwhile, Desi grew up spoiled rotten as the son of the mayor of Santiago, Cuba. At 15, he was welcomed as a regular at a fastidious brothel. Moving to Miami, he landed a job as a guitarist at the Roney Plaza, became a featured singer with Xavier Cugat's band, then formed his own band and had his breakthrough with the conga. After he and Lucy eloped, they soon found themselves separated by film work, and his infidelities led to her filing for divorce before their fourth anniversary. They became reconciled, but Desi's gambling, girls, and booze never stopped, and life became hell on earth. The birth of Ricky, Jr., on I Love Lucy, timed to the birth of Desi, Jr., in real life, drew unbelievable ratings and had the country crazed. The final I Love Lucy brought on national mourning. Lucy's second marriage, to Gary Morton, outlasted her 19 years with Desi, with Gary calling his friend Desi his husband-in-law. Amusing, sometimes moving. (Sixteen pages of b&w photographs- -not seen.) -- Copyright ©1991, Kirkus Associates, LP. All rights reserved.