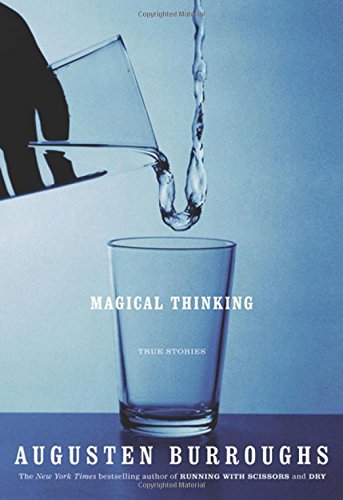 Signed by author on title page in black fountain ink. By the author of SELLEVISION, RUNNING WITH SCISSORS, DRY, POSSIBLE SIDE EFFECTS, and A WOLF AT THE TABLE. As new, unread copy, in fine, mylar-protected dust jacket. A68. Bookseller Inventory # 9086

From the number-one bestselling author of Running with Scissors and Dry comes Augusten Burroughs's most eagerly anticipated collection yet: true stories that give voice to the thoughts that we all have but dare not mention.

It begins with a Tang Instant-Breakfast Drink television commercial:

"Yes, you, Augusten. You were great. We want you." I can now trace my manic adult tendencies to this moment. It was the first time I felt deeply thrilled about something just a fraction of an instant after being completely crushed. I believe those three words "We want you" were enough to cause my brain to rewire itself, and from then on, I would require more than other people....- from Magical Thinking's "Commercial Break"

A contest of wills with a deranged cleaning lady. The execution of a rodent carried out with military precision and utter horror. Telemarketing revenge. A different kind of "roof work." Dating an undertaker who shows up in a minivan. This is the fabric of Augusten Burroughs's life: a collection of true stories that are universal in their appeal yet unabashedly intimate, stories that shine a flashlight into both dark and hilarious places. With Magical Thinking, Augusten Burroughs goes where other memoirists fear to tread.

It’s best to know this from the start: Augusten Burroughs is mean. Augusten Burroughs is also outrageously X-rated. If you can get past those two things, Burroughs might just be the most refreshing voice in American books today, and his collection of acerbic essays will have you laughing out loud even while cringing in your seat. Whether he is stepping on the fingers of little children or giving you the blow-by-blow on a very unholy act, Burroughs manages to do it in a way that fills conflicted fans with both horror and glee.

Spanning from the surprisingly Machiavellian portrayal of his role in a Tang commercial at age seven to his more recent foray into dog ownership, Burroughs has what seems to be an endless supply of offbeat life experiences. Much like earlier David Sedaris collections (Barrel Fever or Naked), there are occasional fits and starts in the flow of the writing, but ultimately, Magical Thinking is worth reading (and re-reading). If you’re familiar with Burroughs's memoirs, Running with Scissors, and Dry, you may find parts of Magical Thinking repetitive, since these essays bounce around in time between the other two. In fact, in an ideal world, this collection would have come first, as it offers an excellent introduction to Burroughs's fascinating life. --Vicky Griffith