Items related to THE MAKIOKA SISTERS 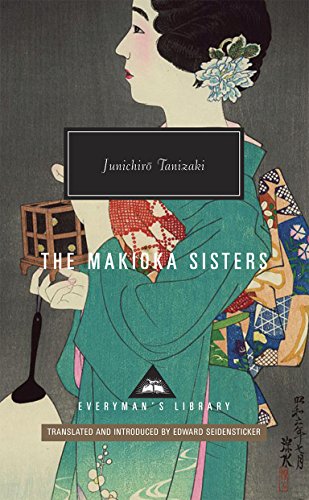 Translated and introduced by Edward G. Seidensticker. Hailed as the greatest Japanese novel of the twentieth century, THE MAKIOKA SISTERS is a subtle tale of domestic oppression worthy of Balzac or Chekov. In this saga of a once prosperous family struggling to marry off one of their daughters, Tanizaki tells the story of individuals striving to preserve their self-respect as they come to terms with decline and changing times. A wonderful portrait of Japanese life in the first half of the twentieth century. Very fine, first thus (British) edition, first printing in black cloth boards with sewn-in silk marker, in fine, mylar-protected dust jacket. *Packed carefully and shipped in a box to insure arrival in described condition.{Not remainder-marked or price-clipped} BUND. Bookseller Inventory # 023203

Junichirō Tanizaki’s magisterial evocation of a proud Osaka family in decline during the years immediately before World War II is arguably the greatest Japanese novel of the twentieth century and a classic of international literature.

Tsuruko, the eldest sister of the once-wealthy Makioka family, clings obstinately to the prestige of her family name even as her husband prepares to move their household to Tokyo, where that name means nothing. Sachiko compromises valiantly to secure the future of her younger sisters. The shy, unmarried Yukiko is a hostage to her family’s exacting standards, while the spirited Taeko rebels by flinging herself into scandalous romantic alliances and dreaming of studying fashion design in France. Filled with vignettes of a vanishing way of life, The Makioka Sisters is a poignant yet unsparing portrait of a family—and an entire society—sliding into the abyss of modernity. It possesses in abundance the keen social insight and unabashed sensuality that distinguish Tanizaki as a master novelist.
From the Hardcover edition.

The four Makioka sisters lead very complicated, strenuous lives, although on the surface nothing much ever happens to them. Part of a fading Japanese aristocracy in the years leading up to World War II, they cannot escape the wide net of the family name--something always brings them back to the reality of "being a Makioka." Running out of money, living in falling-apart houses, growing older beneath the sunlight of the modern world, they do their best to preserve the rituals of the past. The two older sisters work diligently to arrange a marriage for the third sister, Yukiko. Desperate to find someone to take care of her, they keep lowering their standards. One night they find themselves out with a drunk, selfish crackpot who has no money, but who is supposed to be related to a man who works for an important utility company. The fact that he is even a candidate for their sister's hand is a sign of how far they have fallen.

There are other signs in this remarkable, utterly compelling Japanese epic. At one point, a flood overwhelms their small town of Osaka. The youngest sister, Taeko, is having tea at the impeccably decorated home where her sewing teacher, Mrs. Tamaki, lives with her son Hiroshi. When the rain first appears beneath the door,

the three were still rather enjoying themselves, shouting at each other in the best of spirits. They all had a good laugh when Hiroshi, reaching to grab the briefcase in which he had brought home his school books, bumped his head on the bobbing radio. But after perhaps a half hour, there came a moment when the three fell silent. Almost immediately, Taeko remembered afterwards, the water was above her waist. As she clutched at a curtain, a picture fell from over her head; the curtain had probably brushed against it. It was a picture Mrs. Tamaki was especially fond of.

Junichiro Tanizaki wrestled throughout his career with the idea of a country where tribes of aristocrats live as relics, grasping at the past through gestures, manners, small and intricate private laws. The narrative suspense of The Makioka Sisters is rooted in this single-minded nostalgia, this strict attention to the details of domestic life as the outer world becomes more and more incomprehensible. Pages are devoted to musing about whether Yukiko should "risk" meeting a potential husband when there is a spot above her eye--maybe she should play it safe and go to the doctor about it; maybe the potential husband will interpret it as bad luck. Tanizaki manages to make the struggle over this small, dark spot wildly compelling. I could not sleep until I discovered its fate.

If epic literature is based in the dramatic and forward-moving narrative of a male hero's journey, The Makioka Sisters is a female epic of inaction--trying to figure out what to wear, crying for no reason at the same time every afternoon. With each perilous, pathetic step, the sisters are heroes setting out for the new world. They're like Odysseus, except without the ship and without the sea. --Emily White