Items related to A MILLION NIGHTINGALES 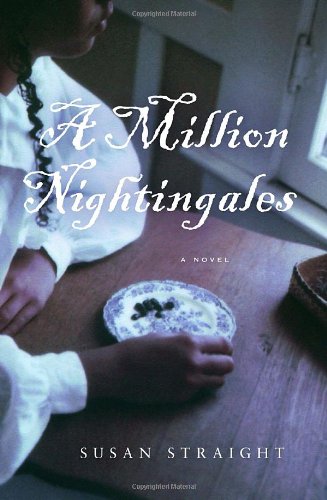 Signed by author on title page in black fountain ink. From National Book Award finalist Susan Straight comes a haunting historical novel about a Louisiana slave girl's perilous journey to freedom. Daughter of an African mother and a white father she never knew, Moinette is a house maid on a plantation south of New Orleans. At fourteen she is sold, separated from her mother without a chance to say goodbye. Bright, imaginative and well aware of everything she risks, Moinette at once begins to prepare for an opportunity to escape. Inspired by a true story,A MILLION NIGHTINGALES portrays Moinette's experience-and the treacherous world she must navigate-with uncommon richness, intricacy, and drama.Author of AQUABOOOGIE, I BEEN IN SORROW'S KITCHEN AND LICKED OUT ALL THE POTS, BLAfirs edition, first prfirst edition, first printing,CKER THAN A THOUSAND MIDNIGHTS, and HIGHWIRE MOON. Fine, in fine, mylar-protected dust jacket.Not remainder-marked or price-clipped} L11. Bookseller Inventory # 11420

A haunting, beautifully written novel set in early-nineteenth-century Louisiana: the tale of a slave girl’s journey—emotional and physical—from captivity to freedom.
Susan Straight has been called “a writer of exceptional gifts and grace” (Joyce Carol Oates). In A Million Nightingales she brings those gifts to bear on the story of Moinette, daughter of an African mother and a white father she never knew. While her mother cares for the plantation linens, Moinette tends to the master’s daughter, which allows her to eavesdrop on lessons. She also learns that she is property, and at fourteen she is sold, separated from her mother without a chance to say goodbye. Heartbroken and terrified, and with a full understanding of what she will risk, Moinette begins almost immediately to prepare herself for the moment when she will escape.

It is Moinette’s own voice that we hear—bright, rhythmic, observant, and altogether captivating–as she describes her journey through a world of brutality, sexual violence, and loss. Quick to see the patterns of French, American, and African life play out around her, Moinette makes her way from sugarcane fields through mysterious bayous to the streets of Opelousas, where the true meaning of freedom emerges from the bonds of love.
An uncommonly rich novel, brimming with event and character, A Million Nightingales is a powerful confirmation of the remarkable novelist we have in Susan Straight.

Susan Straight is the author of five previous novels, including the best-selling I Been in Sorrow’s Kitchen and Licked Out All the Pots and Highwire Moon, which was a finalist for the National Book Award and won the California Book Award. She is a regular commentator for NPR, and her fiction and essays have appeared in Harper’s Magazine, The New York Times, The Nation, Salon, Zoetrope, McSweeney’s, and Best American Short Stories, among many other publications. She has received a Lannan Foundation Award and a Guggenheim Fellowship. She lives in Riverside, California, with her three daughters.