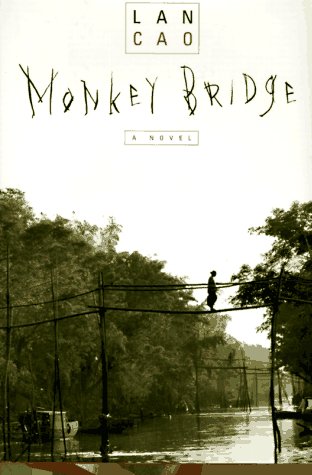 Mai Nguyen, a young Vietnamese woman, comes of age in America after leaving Saigon in 1975, while her mother has difficulty adjusting to life in their new country, in a moving novel filled with Vietnamese lore. A first novel. Tour.

Just months before the Communists roll into Saigon in 1975, Mai Ngyuen, the young Vietnamese narrator of Monkey Bridge, is packed off to the U.S. Her sorrowing mother escapes in the final hours, leaving Mai's grandfather behind. Now it's Mai who plays the elder, navigating a rude, incomprehensible culture that makes possible a sudden twist in life. "Not only could we become anything we wanted to be in America, we could change what we had once been in Vietnam," she realizes. Though Mai watches her mother's ebullient friend shave years off her age and a one-time bar girl lay claim to a virtuous past as a Confucian teacher, she never wonders how much of their lives her mother has reinvented. Following in the footsteps of The Woman Warrior, this compelling novel draws on folk tales and traditions. Despite false notes and occasionally clunky dialogue, it delivers a neat knockout punch in the end.