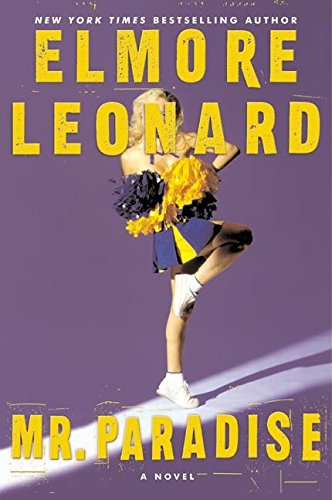 Elmore Leonard is the undisputed master, the “King Daddy of crime writers” (Seattle Times), in the august company of the all-time greats of mystery/noir/crime fiction genre: John D. MacDonald, Dashiell Hammett, James M. Cain, et al. The creator of such unforgettable classics as Stick, Out of Sight, and Get Shorty—not to mention the character of U.S. Marshal Raylan Givens, lately of TV’s hit series Justified—Leonard is in fine form with Mr. Paradise. A riveting Detroit-based thriller enlivened by Leonard’s trademark razor-sharp dialogue, Mr. Paradise follows a smart Victoria’s Secret model’s attempt to score big after surviving a double murder in a millionaire’s mansion...with a lonely cop acting as spoiler.

It's a dubious proposition from the outset, destined to lead to trouble: Chloe Robinette, a high-end former Detroit call girl, asks her lingerie model roommate, Kelly Barr, to help her entertain a wealthy octogenarian trial lawyer named Anthony Paradiso. By "entertain," she means donning a cheerleader's skimpy skirt, but going topless, and doing rah-rah routines beside a TV set while Paradiso--"Mr. Paradise"--watches videotaped football games. A bit kinky for Kelly's taste, but she finally goes along--only to be caught in the middle of a contract hit on Paradiso and Chloe. Rather than tell what little she knows of these crimes, Kelly buys into a scheme, concocted by Paradiso's right-hand man, Montez Taylor, that could lead to a huge payoff from the lawyer's estate. But only if the 27-year-old Kelly can convincingly assume Chloe's identity ...

Elmore Leonard, who's made his career writing about not-too-bright bad guys, fills Mr. Paradise with several memorable specimens of that breed. In addition to Montez, who'd resented his politically incorrect boss for cutting him out of his will, there's also a bottom-feeding defense attorney, Avern Cohn, who runs a murder-for-hire operation on the side, and his well-armed employees of the month, "tough monkeys" Carl Fontana and Arthur Krupa. Less credibly and entertainingly crafted is Frank Delsa, the widowed homicide detective whose hunt for Paradiso's killers is complicated by his attraction to the curvilinear Kelly. This romantic subplot is overly predictable and deflates early expectations that the cunning young model is playing some deeper game here, working an angle that neither Delsa nor Montez anticipates.

After penning a string of character-propelled novels set in Florida (including Glitz, Out of Sight, and the particularly winning La Brava), it's good to see Leonard exploiting the Detroit backdrop again, as he did so expertly in a few of his earlier successes (City Primeval and Killshot, for instance). Yet while Mr. Paradise is rich with comic dialogue and cop-shop color, it never goes beyond the expectations of a Leonard work. This author is too good not to take more chances. --J. Kingston Pierce