Items related to The Magic Wagon 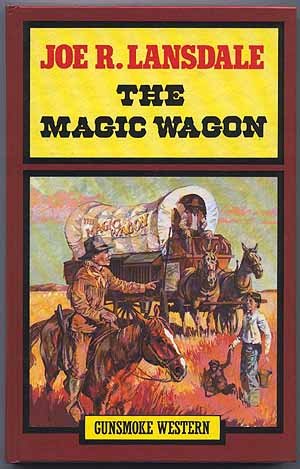 Buster Fogg, a young orphan, joins up with a medicine show known as The Magic Wagon and its two con men, Billy Bob Daniels and Old Albert

In 1986, years before he became known for his hardboiled crime thrillers, Lansdale crafted this wry, nostalgic elegy to the Wild West published in a small print run with limited distribution. A mild-mannered precursor to his brassy The Big Blow, this entertaining episodic novel is also set in turn-of-the-20th-century eastern Texas, where crooked traveling medicine shows and aging gunslingers define the closing frontier. Narrator Buster Fogg's family is wiped out by a twister in an early sequence described with surreal verve. Buster hitches on with Billy Bob Daniels, a patent-medicine pusher and trick shooter who claims to be the illegitimate son of Wild Bill Hickock, joining an entourage consisting of a kindly ex-slave named Albert, and Rot Toe, the wrestling ape. Adventures on the road which include swiping the mummified remains of Billy Bob's "pa" and swindling settlers with their concoction of watered-down whiskey stoke personal tensions that only aggravate troubles when their wagon rolls into Mud Creek and Billy Bob is called out by Texas Jack, a dime-novel desperado who, legend says, intimidated even Wild Bill. Lansdale's affection for the classic western is never in doubt, although he spends much of the novel skillfully deflating the romance of heroic reputations made as much by luck and exaggeration as by skill with a gun. The true charm of the story, though, is iin its telling, which melds laconic humor, colorful colloquialisms and outrageous figures of speech into a Twainesque tall tale. This novel endures as a modern western classic.