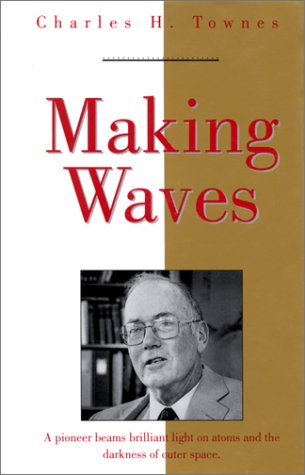 Throughout his career Charles Townes has tended to avoid staying in fields that become too popular; consequently, his work has been characterized by great diversity. This selection of writings, taken from different phases of Towne's professional and personal life, reflects that diversity. Readers will discover brilliant and insightful essays on such wide ranging fields as maser and laser technology, quantum electronics, microwave spectroscopy, and molecules in interstellar space, along with thought-provoking spiritual views on how science and religion come together.

From one of the most imaginative and daring scientific minds of this or any century comes a thoughtful, almost intimate account of a personal journey through his momentous discoveries - achievements that have changed the face of medicine, industry, even weapons. Nobel laureate Charles H. Townes, inventor of the maser and co-inventor, with Arthur Schawlow, of the laser, takes us on a behind-the-scenes tour of his unique - and startlingly productive and creative - way of working. Along the way, you'll learn about how Townes came upon his surprising findings and how he managed to avoid obstacles in his path. Townes introduces us to the wonders of the universe, from the submicroscopic, most minute - the workings of atoms and the even smaller particles that make them up - to the vast outer reaches of space. His tour takes us along paths Townes pioneered: quantum electronics, microwave spectroscopy and the frontiers of our galaxy where he explored the dark, rarefied clouds of gas and dust where new stars form. Recognizing that some of the most revolutionary recent scientific theories about how the universe emerged come close to religious thought, these accessible essays conclude with a uniquely personal coda in which Townes suggests that science and religion occupy the same terrain.

RushLtd is dedicated to providing customers with easy, flawless transactions and excellent books! We provide 100% customer satisfaction and are always here to answer any questions or concerns for our customers.