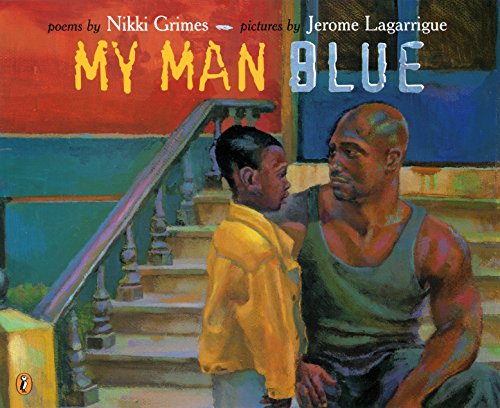 Blue lost one boy to the streets and is determined that this time will be different. And Damon knows that even though he's the "man of the house," there's room for a friend like Blue in his life. At the end of the day, Damon has someone standing steadfast in his corner. Someone true . . . like Blue. Nikki Grimes's moving poems and Jerome Lagarrigue's bold paintings create an emotional and realistic bond of friendship between a man and a boy in a rough world.

Nikki Grimes is the award-winning, New York Times bestselling author of dozens of children’s and young adult books as well as a poet and journalist.

Among the many accolades she has received are the Golden Dolphin Award (2005),the NCTE Award for Excellence in Poetry for Children (2006), the Coretta Scott King Award (2003) for Bronx Masquerade, and the Horace Mann Upstanders Award (2011) for Almost Zero: A Dyamonde Daniel Book. Additionally, her book Barack Obama: Son of Promise, Child of Hope (illustrated by Bryan Collier) was a New York Times bestseller, and she was acknowledged as an NAACP Image Award Finalist in 1993 for her book Malcolm X: a Force for Change. Her books Meet Danitra Brown (illustrated by Floyd Cooper), Jazmin's Notebook, Talkin' About Bessie (illustrated by E.B. Lewis), Dark Sons, The Road to Paris, and Words with Wings were each awarded Coretta Scott King Honors. Visit her online at www.nikkigrimes.com.