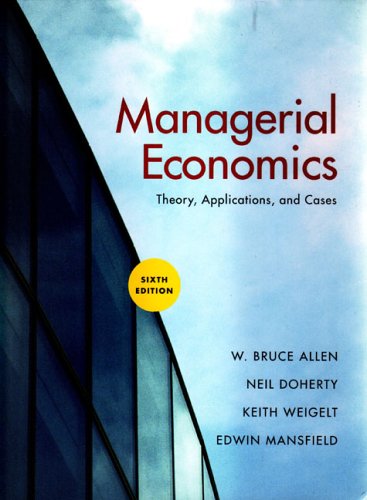 Through five editions, Managerial Economics has been among the leading texts in the field.

Maintaining its hallmark clarity, abundant use of real-world examples and cases, and strong coverage of international issues and technological change, the Sixth Edition has been rigorously updated and revised, adding six entirely new chapters and an innovative student Web site. About the Author:

W. Bruce Allen (Ph.D., Economics, Northwestern University) is Professor of Business and Public Policy at the Wharton School of Business, the University of Pennsylvania. For many years he was the Vice Dean and Director of the Wharton Graduate Division. He is an internationally recognized expert in transportation economics, and he specializes in demand theory and logistics. In addition to his duties at Wharton, Professor Allen teaches each summer in India and consults for numerous companies domestically and abroad. He has won a number of teaching awards, including the coveted Anvil Award, the highest teaching honor at Wharton since it is voted on by the students.

Neil A. Doherty (Ph.D. Cranfield Institute) is the Frederick H. Ecker Professor of Insurance and Risk Management at the Wharton School of Business, the University of Pennsylvania. He is an internationally recognized expert in corporate risk management, and is the author of Integrated Risk Management (McGraw-Hill, 2000). Professor Doherty has also won numerous teaching awards.

The late Edwin Mansfield was for many years a distinguished professor of economics at the University of Pennsylvania. He was an internationally recognized expert in the economics of technology and industrial organization. His numerous texts, all published by W.W. Norton, have sold millions of copies around the world. In 1979, when Sino-American scientific agreements were finally reached, Mansfield was the first American economist to lecture in the People's Republic of China.

Keith Weigelt (Ph.D., Economics, Northwestern University) is the Rebecca and Morris Marks Professor of Management at the Wharton School of Business, the University of Pennsylvania. He is an internationally recognized expert in business strategy, game theory, and tournaments, with articles published in the following leading journals: Journal of Political Economy, Econometrica, American Economic Review, Quarterly Journal of Economics, Journal of Business, and Management Science. Professor Weigelt has won numerous teaching awards, most recently the Undergraduate Division Excellence in Teaching Award and the “Tough, but I will thank you in 5 years” Award.