Items related to Le Mans: The Official History of the World's Greatest... 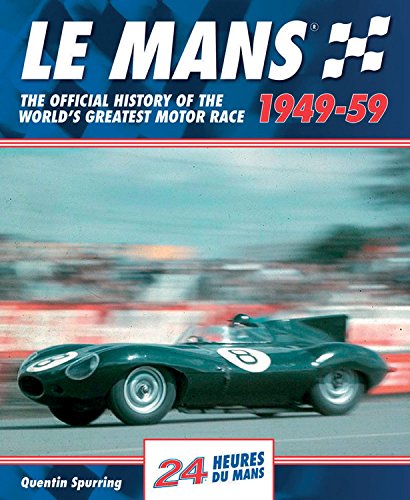 Title: Le Mans: The Official History of the World's...

This was a very important period in the Le Mans story. Ferrari and Jaguar raced to stake claims as the foremost manufacturers of high-performance cars. Mercedes-Benz came back from war-ravaged Germany and again set the standards in race-car engineering. Aston Martin finally won at its 20th attempt. Enormous crowds - approaching half a million people - saw the first rear-engined saloons to compete at Le Mans, and the first mid-engined sports-racing cars, and the first diesels. On-track performance soared. In 1949 the fastest car hit 135mph on the unique Mulsanne straight. Before the end of the 1950s, top speeds exceeded 180mph. This fascinating book tells the stories of these increasingly potent racing cars and conveys the punishing nature of an incomparable event - the ultimate test of the mental and physical abilities of the fragile individuals who make up racing teams, be they drivers, engineers, strategists or mechanics.

Highly detailed year-by-year coverage of the decade's ten races, giving over 30 pages of information and photographs for each year.

- Official status provides a number of unique features, including the reproduction of the full-color race poster artwork for each year and photographs from the ACO's archives.

- The images include rare color, and the emphasis is on photographs that enthusiasts will not have seen before.

- The story of each race is told through photographs and an accompanying commentary.

- The whole work is beautifully designed and presented.

- The 1950s was a decade of post-war recovery, with defeated Germany providing only one of the period's race winners - Mercedes-Benz in 1952. Britain, by contrast, took six victories – five for Jaguar, one for Aston Martin.

A past editor of Autosport, the world's top motorsports weekly, Quentin Spurring has a long-held passion for the Le Mans 24 Hours – he has reported from the race 26 times – and is the ideal author for this series of officially endorsed books. In addition to his books in this Le Mans series (1923-29, 1930-39, 1949-59, 1960-69, 1970-79, 1980-89 and 1990-99) , he has written books about Jim Clark, Gilles Villeneuve and Ronnie Peterson, and his book Grand Prix: Images of the First 100 Years, from David Bull Publishing, won an award from the American Publishers Association (APA). He has been the European Motorsport Correspondent of the US publication, AutoWeek, since 1982.