Items related to Maps and Mapmakers of the Civil War 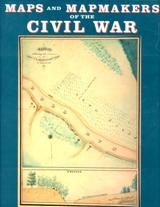 Maps and Mapmakers of the Civil War

New York, Harry N. Abrams, 1999, first edition. Tall 4to, 272pp. There is a small scribbled letter penned (by accident, it appears) on the ffe, otherwise the book is near fine. The dust jacket shows some shelf wear and faint scratches on the front and back, so is just very good. A good map during a war can spell the difference between victory and defeat. This is a comprehensive collection of the Civil War's most notable, interesting and beauitiful maps and tells the story of how they were made. There are 150 full color reproductions gathered from obscure and famous collections. There is also a thorough examination of Civil War maps, mapmaking and mapmakers. Bookseller Inventory # 16657

Title: Maps and Mapmakers of the Civil War

Book by McElfresh, Earl B.

During the Civil War, a good map could spell the difference between victory and defeat. This book collects, for the first time, the war's most notable, interesting, and beautiful maps-and tells the story of how they were made. Ranging from exquisitely detailed renderings reproduced in full color to rough pencil sketches drawn from horseback, these maps-many never before reproduced-are both striking works of art and invaluable historical artifacts. The lively, anecdotal text explains the techniques and travails of mapmaking during the war and reveals the little-known cartographic exploits of George Armstrong Custer, writer Ambrose Bierce, and Brooklyn Bridge engineer Washington Roebling, among many others. Here is an extraordinary gift for Civil War enthusiasts everywhere. 180 illustrations, 150 in full color, 911/2 x 1133/4 Subsidiary Rights: Selected by the History Book Club Earl B. Mcelfresh, a cartographer and map historian, is president of the McElfresh Map Company, which publishes much-sought-after hand-drawn maps of Civil War battlefields. He lives in Olean, New York. Stephen W. Sears, a renowned Civil War historian, is the author of The Landscape Turned Red and To the Gates of Richmond.

The Wright Book at Booktown Books in Grass Valley, CA is a member of an eleven-dealer book cooperative. We do professional book appraisals and book searches and we buy high quality books. We have an eclectic selection of high quality rare, vintage, gently used, and out-of-print books for sale in almost any category. All books are cleaned and, if they have dust jackets, they are usually in Mylar covers.


We guarantee the condition of every book as described on the Abebooks web site. If you're dissatisfied with your purchase (Incorrect Book/Not as Described/Damaged) or if the order hasn't arrived, you're eligible for a refund within 10 days after the estimated delivery date. If you've changed your mind about a book that you've ordered, please use the 'ask bookseller a question' link to contact us and we'll respond within 2 business days.


Shipping & handling: Shipping costs are based on books weighing 2.2 LB, or 1 KG. If your book order is heavy or oversized, we may contact you to let you know extra shipping is required. Overseas shipping for a book under 4 lbs. which fits in the US Post Office Global Priority envelope is generally $25.00 to Canada and Mexico and $25.00 or more to almost any other country. Any order over 4 lbs. will be quite a bit more expensive and we will contact you to okay any change in postage rate with you before we send the book.