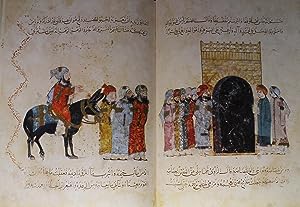 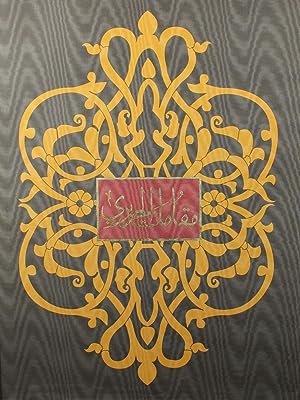 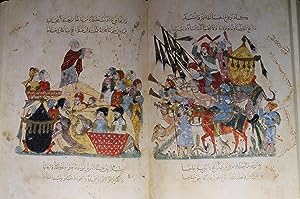 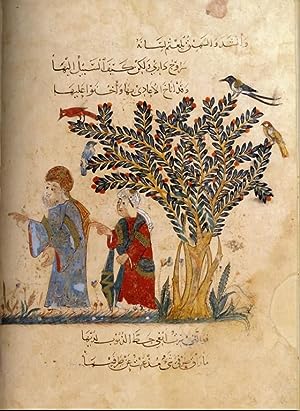 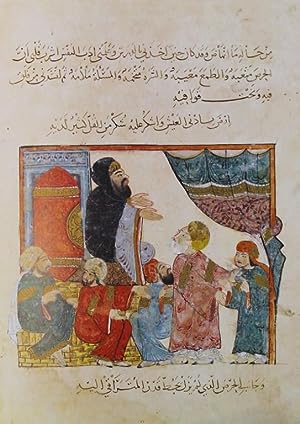 Volume I: Introduction 42 pp.; of English, French & German text + XXII pp.; of Arabic text, biblio./ Volume II: authentic facsimile reproduction of the original Arabic manuscript which is housed at the Bibliotheque Nationale (Paris), 334 pp.; (380 x 270 mm), 110 colour miniatures illustrations by Yahya Al-Wasiti. Set in mint condition. New. LIMITED edition to 2000 numbered copies. A MONUMENTAL WORK, and a landmark in Arabic paintings and miniatures. It combines the primary excellence of being a grand collection of literature admired during a long and important period of Arab history, and fascinating collection of miniatures. " Among the treasures of the rich collection of manuscripts at the Bibliotheque Nationale in Paris is a codex of 168 folios (arabe 5847) with 101 illustrations containing the complete text of what is called al-Maqamat al-Haririyah in a decorated cartouche awkwardly located on the upper part of the first folio. The manuscript is sometimes known as the Schefer Maqamat, because it was given to the Bibliotheque Nationale by the Orientalist scholar Charles Schefer, who probably acquired it somewhere in the Ottoman Empire, where he had spent many years Dozens of manuscripts of Hariri s Maqamat have been preserved from his own time.Of all the manuscripts with pictures containing Al-Hariri s great work, (this copy) towers above all others for the quality and variety of its illustrations. It was completed in C. E. 1237 (A. H. 634, in the month Ramadan) and according to its colophon, was copied and illustrated by the same individual, Yahya ibn Mahmud ibn Yahya ibn Abi al-Hasan ibn Kuwwarih al-Wasiti, presumably originating from the city of al-Wasit. .This essay was written at a time of great sadness for me, as presumably civilized human organizations failed to find ways to resolve differences and felt compelled to kill each other instead. By the time this book comes out, the worst of the war will be over, but the emotional depression of men and women of good will is likely to remain for a while. This book which deals, if not with Baghdad itself, certainly with Iraq, can be construed as a homage to the permanent values of mankind and to the power and fascination of art, regardless of when or where it was made". Oleg Grabar from his introduction. # 30527 Size: Folio. Bookseller Inventory # 005192


Payment may be made by: UK sterling cheques drawn on UK banks, US dollar cheques drawn on US banks also accepted without extra charge. Mastercard and Visa also accepted. Libraries and institutions can be billed, but kindly enquire first.Invoices will be in UK pound sterling.
All orders are subject to availability, and will be confirmed. All prices exclude any shipping, packing and insurance costs that may be involved, and will be notified along with any order confirmation.
The condition of all b...


Orders usually ship within 2 business days. By priority "signed for" mail. Shipping costs are based on books weighing 2.2 LB, or 1 KG. If your book order is heavy or oversized, we may contact you to let you know extra shipping is required. There aren't shipping by Surface Mail anymore.