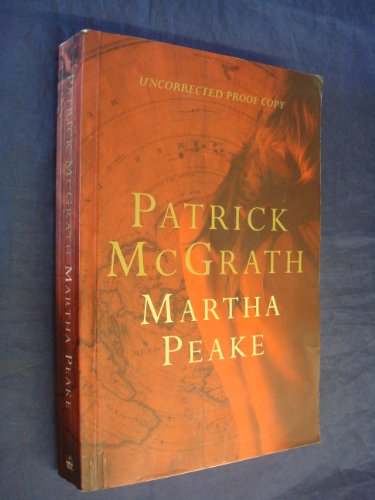 Review: "It is a black art, the writing of a history, is it not?" So begins Martha Peake, a gripping narrative that takes the reader back to London and America during the revolutionary epoch of the 1770s. Patrick McGrath's sixth work of fiction begins several decades later, when young Ambrose Tree is summoned to visit his dying Uncle William at Drogo Hall. Assuming that he is about to inherit his uncle's estate, he rushes across Lambeth Marsh to the great manor house. Instead, though, he's promptly drawn into his uncle's extraordinary story of Harry Peake and his headstrong young daughter, Martha.

Harry, "to whom Nature in her folly gave the soul of a smuggler, and the tongue of a poet," was a Cornish smuggler, horrifically mutilated in a fire that killed his wife and dispersed his children. Only Martha stood by him. As the story unfolds, she follows her father to London, where the self-anointed, poetry-spouting "Cripplegate Monster" displays his hideously deformed body in the taverns and watering holes of London's underworld. Soon Harry comes to the sinister attentions of Lord Drogo, who "wanted him for his Museum of Anatomy." As father and daughter are drawn into this gentleman scientist's world, Harry turns to drink, catastrophically abusing Martha and sending her fleeing to America, where she becomes embroiled in the struggle for independence from England. At this point, the story may seem to have wandered far afield. But as Martha Peake reaches its climax, Ambrose realizes that the fate of both parent and child is much closer to home than he could ever have imagined.

Practicing the black art of storytelling to near-perfection, Patrick McGrath has produced a wonderful tale of "sacrifice and abomination and heroism and resolve and victory." The book's darkness and intermittent grotesquerie will cement his New Gothic reputation. Still, Martha Peake belongs more arguably in the company of Charles Dickens, whose literary ghost haunts these pages no less powerfully than those of the tragic father-and-daughter team. --Jerry Brotton

1. Martha Peake : A Novel of the Revolution

3. Martha Peake - a Novel of the Revolution

7. MARTHA PEAKE: A Novel of the Revolution

Book Description Viking, London, 2000. Hardcover. Condition: Near Fine. Dust Jacket Condition: Near Fine. First Edition. First impression of the true first edition, with full number-string sequence including the number "1" on the publisher's prelims copyright page, as called for: 1 3 5 7 9 8 6 4 2. ***Near fine in orange cloth-covered boards with black titles to spine. Black front and rear free endpapers and pastedowns. Boards bright and clean. Pages clean. No inscriptions. Spine tight. ***In a near fine colour-illustrated dustwrapper that has not been price-clipped, showing the original publisher's price of £12.99. No tears. No fading. Dustwrapper bright and crisp. ***242 mm x162 mm. 340 pages. ***'Summoned by his elderly uncle, Ambrose Tree rides out across the Lambeth Marsh to Drogo Hall. As he settles down by a crackling fire in a drawing room of the giant old house, a large glass of Hollands-and-water in his hand, the old man begins to tell him the story of Harry and Martha Peake: how Harry, in a moment of folly was horribly disfigured by the brute intent of a burning roof beam. How his wife perished, and his livelihood as a smuggler - along the wild coasts of eighteenth century Cornwall - was lost. And how his daughter Martha, his sole remaining comfort, a proud girl with a shock of long red hair, set out with him for the haven of broken men, for London. ***In two small rooms over a pub in Cripplegate Street, Harry and Martha live in a rough-hewn harmony until, in time, the lacerations upon Harry's soul grow as monstrous as his skeletal deformities. He becomes violent, and Martha is forced to flee to the sanctuary of an English nobleman, the famous anatomist Lord Drogo. Yet there is no real safety in that man's house. The distance between father and daughter is too short, their bond too strong. When Harry commits a final unspeakable act, Martha is forced to seek a more distant place of refuge and sets sail for America. ***In this New World, which is soaked with a spirit of looming rebellion, it appears Martha might finally find contentment. But can she change the course of her own tragic destiny? ***Martha Peake is a gripping, beautifully written and haunting masterwork.' ***'The sensuous world that Mr McGrath creates is intense in its beauty --- mesmerizing' [The New York Times Book Review on "Spider"] Quote and review quote about a previous novel, "Spider" from inside front and rear of dustwrapper blurb respectively. ***First impression of the true first edition in its original dustwrapper in very nice, bright clean condition. Of interest to collectors of Patrick Mcgrath and gothic literary fiction first edition titles. ***For all our books, postage is charged at cost, allowing for packaging: any shipping rates indicated on ABE are an average only: we will reduce the P & P charge where appropriate - please contact us for postal rates for heavier books and sets etc. Seller Inventory # 6641

8. Martha Peake : A Novel of the Revolution