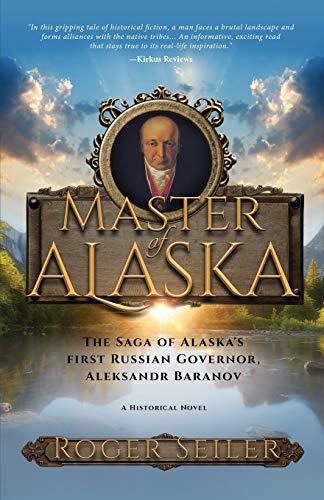 Synopsis: Master of Alaska -the exciting story of Aleksandr Baranov, a charismatic Russian leader, who left his family in 1790 to sail to Alaska as chief manager. Shipwrecked, he survived a harsh wilderness; motivated Aleuts to help him; married a young Native; and endured massacres from the Tlingit, meddling priests, the Battle of Sitka and a running duel with powerful Tlingit Chief Katlian. He built an empire and sought peace with the Tlingit, helped by his wife and teenage daughter. Alaska is part of the U.S. today, thanks largely to Baranov.

About the Author: Roger Seiler grew up in King Salmon on the Alaska Peninsula as the son of a bush pilot. He learned to fly at age 17, was a sport fishing guide on the Naknek River and a commercial salmon fisherman on Bristol Bay. A graduate of Deep Springs College and the UCLA film school, he made traffic safety films, became an in-house filmmaker for IBM, then started his own motivational film and poster company, followed by a software company, Leadership Software Corp. His first book, Naked Thinkers, is available as a Kindle book on Amazon.

Book Description True North Publishing, 2016. Condition: Good. A+ Customer service! Satisfaction Guaranteed! Book is in Used-Good condition. Pages and cover are clean and intact. Used items may not include supplementary materials such as CDs or access codes. May show signs of minor shelf wear and contain limited notes and highlighting. Seller Inventory # 1628653299-2-4