Items related to The Maverick and His Machine: Thomas Watson, Sr. and...

Home Maney, Kevin The Maverick and His Machine: Thomas Watson, Sr. and the Making ...
Stock Image 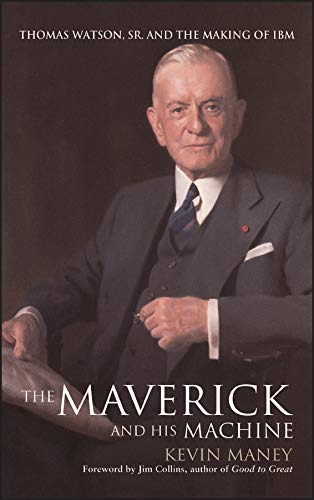 The Maverick and His Machine: Thomas Watson, Sr. and the Making of IBM

Title: The Maverick and His Machine: Thomas Watson,...

The first complete look at one of America's legendary business leaders

This groundbreaking biography by Kevin Maney, acclaimed technology columnist for USA Today, offers fresh insight and new information on one of the twentieth century's greatest business figures. Over the course of forty-two years, Thomas J. Watson took a failing business called The Computer-Tabulating-Recording Company and transformed it into IBM, the world's first and most famous high-tech company. The Maverick and His Machine is the first modern biography of this business titan. Maney secured exclusive access to hundreds of boxes of Watson's long-forgotten papers, and he has produced the only complete picture of Watson the man and Watson the legendary business leader. These uncovered documents reveal new information about how Watson bet the company in the 1920s on tabulating machines-the forerunners to computers-and how he daringly beat the Great Depression of the 1930s. The documents also lead to new insights concerning the controversy that has followed Watson: his suppos ed coll usion with Adolf Hitler's Nazi regime.

Maney paints a vivid portrait of Watson, uncovers his motivations, and offers needed context on his mammoth role in the course of modern business history. Jim Collins, author of the bestsellers Good to Great and Built to Last, writes in the Foreword to Maney's book: "Leaders like Watson are like forces of nature-almost terrifying in their release of energy and unpredictable volatility, but underneath they still adhere to certain patterns and principles. The patterns and principles might be hard to see amidst the melee, but they are there nonetheless. It takes a gifted person of insight to highlight those patterns, and that is exactly what Kevin Maney does in this book."

The Maverick and His Machine also includes never-before-published photos of Watson from IBM's archives, showing Watson in greater detail than any book ever has before. Essential reading for every businessperson, tech junkie, and IBM follower, the book is also full of the kind of personal detail and reconstructed events that make it a page-turning story for general readers. The Maverick and the Machine is poised to be one of the most important business biographies in years.

Kevin Maney is a nationally syndicated, award-winning technology columnist at USA Today, where he has been since 1985. He is a cover story writer whose story about IBM's bet-the-company move gained him national recognition. He was voted best technology columnist by the business journalism publication TJFR. Marketing Computers magazine has four times named him one of the most influential technology columnists. He is the author of Wiley's MEGAMEDIA SHAKEOUT: The Inside Story of the Leaders and the Losers in the Exploding Communications Industry, which was a Business Week Bestseller.
Residence: Clifton, VA .
"Watson was clearly a genius with a thousand helpers, yet he managed to build an institution that could transcend the genius."-from the Foreword by Jim Collins
"Like all great biographers, Kevin Maney gives us an engaging story . . .his fascinating and definitive book about IBM's founder is replete with amazing revelations and character lessons that resonate today."-Rosabeth Moss Kanter, Harvard Business School, bestselling author of Evolve! and When Giants Learn to Dance

"At just the right moment when we most need it, Maney brings us a penetrating picture of one of the most important figures of the twentieth century, a man whose life teaches us about resiliency-individual and institutional-and much about what we need to recreate greatness in our own future."
-From the Foreword by Jim Collins

IBM is one of the most successful companies in American history; it ushered in the Information Age and dominated the information industry for more than seventy years. Yet the builder of IBM has never been thoroughly examined and brought to life. Now, award-winning journalist Kevin Maney, using thousands of documents never before made public, reveals the lasting achievement of the man who forever changed the world of business.

Watson was the rare businessman who transcended business. His fame and power echoes that of Microsoft's Bill Gates today and Standard Oil's John D. Rockefeller in an earlier age. Watson, in fact, created the role of the celebrity CEO. On a grander scale, Watson invented the modern concept of the corporate culture, and proved its power to make a company great.

Watson's story plays out on a global stage, intersecting with the major events and people of his time. A business failure as a young man, he rocketed to the top levels of National Cash Register before a federal antitrust trial nearly brought down NCR and seemingly crushed his career. The moment forever shaped Watson's business sensibilities and drove him to reinvent the American corporation. In 1914, he took charge of a struggling little entity called the Computer-Tabulating-Recording Company, infused it with his values, his competitive drive, and his personality quirks, and transformed it into International Business Machines-IBM.

Over and over, Watson made daring bets and won, each time vaulting IBM to a new level of size and power. In the 1920s, when information wasn't obviously going to become a big industry, he bet IBM's future on tabulating machines-the mechanical forerunners to computers.

In the Depression of the 1930s, Watson pumped money into R&D and kept factories running while most companies slashed budgets and jobs. When Franklin Roosevelt's New Deal created massive information demands, IBM was ready to fill them. The company's growth exploded, and Watson became the highest-paid American.

In his later years, Watson's life took a Shakespearean turn. He struggled with his son for power, and stayed on at IBM into his eighties, endangering the empire he'd built. He became entangled in controversy by accepting a medal from Nazi Germany, a mistake that haunts his legacy today. In the late 1940s, Watson and Thomas Watson, Jr. guided IBM through the torturous transition from mechanical technology to electronic computers.

With exceptional detail that takes the reader inside business meetings in Watson's office and into his relationships with presidents, business leaders, employees, and family members, Maney tracks Watson's rise from obscure cash register salesman to household name. Maney examines the profound impact Watson had on modern companies, the business lessons learned, and the personal motivations that spurred Watson's frantic energy and inexhaustible drive for success. The Maverick and His Machine for the first time reveals the true character of the man whose visionary leadership laid the foundation for the computer revolution.