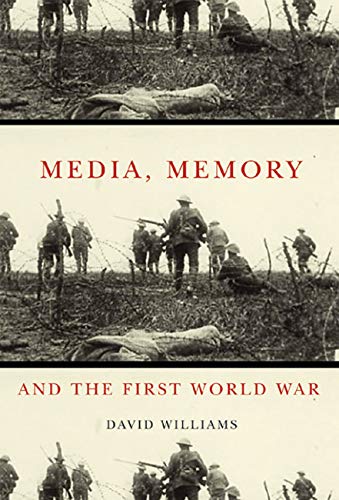 Why does the Great War seem part of modern memory when its rituals of mourning and remembrance were traditional, romantic, even classical? This book shows how classic Great War literature, including work by Remarque, Owen, Sassoon, and Harrison, was symptomatic of a cultural crisis brought on by the advent of cinema. Series: McGill-Queen's Studies in the History of Ideas Series. Num Pages: 288 pages. BIC Classification: 3JJF; APFA; DSBH. Category: (UP) Postgraduate, Research & Scholarly. Dimension: 155 x 236 x 27. Weight in Grams: 630. . 2009. 1st Edition. Hardcover. . . . . Books ship from the US and Ireland. Bookseller Inventory # V9780773535077

Synopsis: Of interest to historians, classicists, media and digital theorists, literary scholars, museologists, and archivists, Media, Memory, and the First World War is a comparative study that shows how the dominant mode of communication in a popular culture - from oral traditions to digital media - shapes the structure of memory within that culture.

About the Author: David Williams was recently elected Professor Emeritus of English, Theatre, Film & Media at the University of Manitoba. He is the author of five critical books: Milton's Leveller God; Media, Memory, and the First World War; Imagined Nations: Reflections on Media in Canadian Fiction; Confessional Fictions: A Portrait of the Artist in the Canadian Novel; and Faulkner's Women: The Myth and the Muse. He is also the author of three novels: The Burning Wood; The River Horsemen; Eye of the Father.

Book Description McGill-Queen's University Press. Hardcover. Condition: Very Good. A copy that has been read, but remains in excellent condition. Pages are intact and are not marred by notes or highlighting, but may contain a neat previous owner name. The spine remains undamaged. At ThriftBooks, our motto is: Read More, Spend Less. Seller Inventory # G0773535071I4N00

2. Media, Memory, and the First World War (McGill-Queen?s Studies in the Hist of Id)

3. Media, Memory, and the First World War (McGill-Queen?s Studies in the Hist of Id)

Book Description McGill-Queen's University Press, 2009. Condition: Good. A+ Customer service! Satisfaction Guaranteed! Book is in Used-Good condition. Pages and cover are clean and intact. Used items may not include supplementary materials such as CDs or access codes. May show signs of minor shelf wear and contain limited notes and highlighting. Seller Inventory # 0773535071-2-4

4. Media, Memory, and the First World War (McGill-Queen?s Studies in the Hist of Id)

5. Media, Memory, and the First World War (McGill-Queen's Studies in the History of Ideas)

6. Media, Memory, and the First World War (McGill-Queen's Studies in the History of Ideas)

Book Description McGill Queens University Press, Montreal, 2009. Hard Cover. Condition: Near Fine. Dust Jacket Condition: Near Fine. First Edition. This book looks almost new. The interior is crisp and fresh. The top corner of the rear end paper has been clipped off, but this is the only flaw. The grey covers are fresh, with just a hint of wear at tips and corners. The dust jacket is not price-clipped, and shows no wear. The jacket is now in a protective mylar cover. An excellent copy. Synopsis: "David Williams shows how classic Great War literature, including work by Remarque, Owen, Sassoon, and Harrison, was symptomatic of a cultural crisis brought on by the advent of cinema. He argues that images from Geoffrey Malins' hugely popular war film The Battle of the Somme (1916) collapsed social, temporal, and spatial boundaries, giving film a new cultural legitimacy, while the appearance of writings based on cinematic forms of remembering marked a crucial transition from a verbal to a visual culture. By contrast, today's digital media are laying the ground for a return to Homeric memory, whether in History Television, the digital Memory Project, or the interactive war museum.". Seller Inventory # 006579