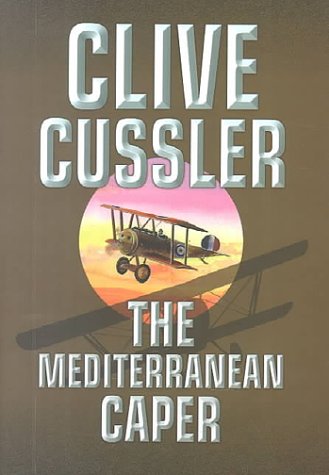 Dirk Pitt rides a tidal wave of intrigue in this classic Cussler.

On an isolated Greek island, a World War I fighter plane attacks a modern U.S. Air Force base--a mysterious saboteur preys on an American scientific expedition--and Dirk Pitt plays a deadly game of hunter and hunted with the elusive head of an international smuggling ring.

From the Publisher: 0n the remote Greek Island of Thasos, a German Albatros, a vintage World War I fighter plane, has swooped out of the blazing blue sky to attack a modern U.S. Air Force base, nearly destroying its fleet of F-105 Starfire jets. Thirty miles offshore, piloting a Catalina en route to the American scientific research vessel First Attempt, Dirk Pitt hears and responds to the Brady Field emergency call. He blows the Albatros back into the oblivion from which it came, ripping open a mammoth half-century-old conspiracy in the process.

Pitt has come to the Aegean to hunt down the mysterious saboteur preying on First Attempt -- the ship's mission is to search for a missing evolutionary link, a rare and possibly extinct fish -- but connecting the sabotage on board to the attack on Brady Field, Dirk Pitt knows he's fishing for a shark: a human shark that smells blood.

The adventure begins with Teri. She's a glamorous modern Greek goddess in a red bikini, devastatingly beautiful, devastatingly dangerous, and the key to a vast drug-smuggling ring about to bring off a lethal billion- dollar deal. As much as she's willing to reveal to Pitt, there's one secret she holds back: the truth about a missing Nazi war criminal now ruling over a corrupt empire. For decades he has managed to elude international authorities, remain one step ahead of the world's top investigators, and destroy all his enemies, except one: Dirk Pitt.

From a thrilling aerial dogfight to heart-stopping hand-to-hand combat, Dirk Pitt follows a trail of blood, treachery, and terror into the depths of a cavernous undersea labyrinth. There, in the legendary Pit of Hades, the action explodes in a climax of unparalleled excitement, as Pitt confronts the brilliance and brutali- ty of a sinister nemesis with a genius for Death.

Book Description Center Point Pub. Library Binding. Condition: GOOD. Spine creases, wear to binding and pages from reading. May contain limited notes, underlining or highlighting that does affect the text. Possible ex library copy, thatâ ll have the markings and stickers associated from the library. Accessories such as CD, codes, toys, may not be included. Seller Inventory # 3158985949

Book Description Condition: Good. The item shows wear from consistent use, but it remains in good condition and works perfectly. All pages and cover are intact (including the dust cover, if applicable). Spine may show signs of wear. Pages may include limited notes and highlighting. May NOT include discs, access code or other supplemental materials. Seller Inventory # 31UE34004BYS_ns

Book Description Condition: Acceptable. May have some shelf-wear due to normal use. Seller Inventory # 0KVBKD00C2BV

Book Description Center Point Pub, 2000. Condition: Good. A+ Customer service! Satisfaction Guaranteed! Book is in Used-Good condition. Pages and cover are clean and intact. Used items may not include supplementary materials such as CDs or access codes. May show signs of minor shelf wear and contain limited notes and highlighting. Seller Inventory # 1585470147-2-4