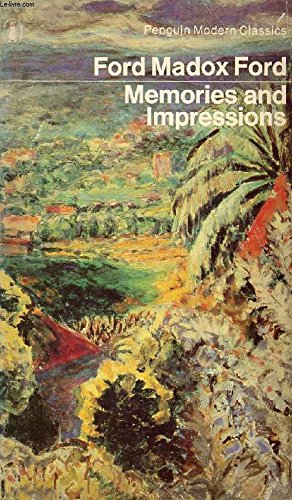 Memories and Impressions : A Study in Atmospheres

This work has been selected by scholars as being culturally important, and is part of the knowledge base of civilization as we know it. This work was reproduced from the original artifact, and remains as true to the original work as possible. Therefore, you will see the original copyright references, library stamps (as most of these works have been housed in our most important libraries around the world), and other notations in the work.

This work is in the public domain in the United States of America, and possibly other nations. Within the United States, you may freely copy and distribute this work, as no entity (individual or corporate) has a copyright on the body of the work.

As a reproduction of a historical artifact, this work may contain missing or blurred pages, poor pictures, errant marks, etc. Scholars believe, and we concur, that this work is important enough to be preserved, reproduced, and made generally available to the public. We appreciate your support of the preservation process, and thank you for being an important part of keeping this knowledge alive and relevant.

About the Author: Ford Madox Ford was an English writer and critic, best known for his novel The Good Soldier, considered to be one of the greatest literary works of the 20th century; the Parade s End tetralogy, which was influenced by Ford s military service during the First World War; and The Fifth Queen trilogy, which chronicles the life of Henry VIII s ill-fated wife, Katherine Howard. As a critic, Ford championed new literature and literary experimentation, and his journals, The English Review and The Transatlantic Review, launched the careers of critically acclaimed authors like Thomas Hardy, Joseph Conrad, Henry James, D. H. Lawrence, and Ernest Hemingway. Ford died in 1939 at the age of 65.

Book Description Paperback. Condition: Fair. A readable copy of the book which may include some defects such as highlighting and notes. Cover and pages may be creased and show discolouration. Seller Inventory # GOR002628770

Book Description Paperback. Condition: Good. The book has been read but remains in clean condition. All pages are intact and the cover is intact. Some minor wear to the spine. Seller Inventory # GOR001908137

Book Description Paperback. Condition: Very Good. The book has been read, but is in excellent condition. Pages are intact and not marred by notes or highlighting. The spine remains undamaged. Seller Inventory # GOR002771440

4. Memories and Impressions : A Study in Atmospheres

Book Description Pengin, 1979. Condition: Good. New Ed. Ships from the UK. Shows some signs of wear, and may have some markings on the inside. Seller Inventory # GRP114973465

8. Memories and Impressions : A Study in Atmospheres

Shipping: US$ 16.53
From France to U.S.A.
Destination, rates & speeds
#renderBDPScripts()