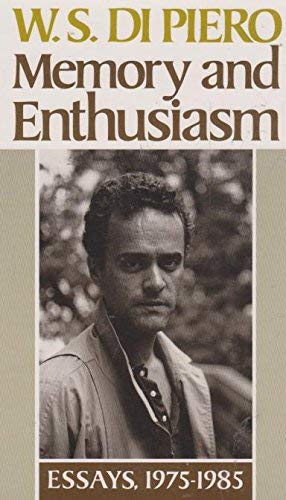 In this remarkable collection of essays, poet and translator W. S. Di Piero draws us toward fresh encounters with literary artists from both sides of the Atlantic--Dante, Keats, Leopardi, Whitman, Pound, William Carlos Williams, Pavese, Sartre, William and Henry James, and others--as well as with filmmakers Robert Altman and Michelangelo Antonioni. Di Piero is a skillful and fervent interpreter of the productive tension between Europe and America. He compels our attention not only to the "passionate interrogations of history and memory" but to enthusiasm--"the celebrative stare, the pause for revelation, the waiting."

Di Piero's themes range from cultural estrangement and the nature of work to the political element in the life of the poetic imagination, the derangements peculiar to American consciousness, and the ambitions of contemporary American poetry. Constantly refining and questioning his own art, he has had as his aim during the ten-year period represented in this book the working out of "rough formulations of what it felt like to be an American poet" and the devising of "pieces of an autobiography which might be the matrix for a poetics." What mattered to him was "experience, specifically the felt intellectual experience of being an American two generations removed from Europe whose saturated Americanism yet retained a dim but certain afterimage of another place."

One result of his search is this exceptionally unified collection in which an informal section of entries culled from his notebooks appears "with a view toward their conversation" with essays that have appeared in such journals as The American Poetry Review, The Sewanee Review, Canto, The Southern Review, The American Scholar, TriQuarterly, and Chicago Review.

Di Piero on memory: "Memory is the oceanic flux of images, spectral feelings, lore, all the history-bound matter of intellection and sensation stirring in the present. It promises futurity, extension. In Book X of the Confessions, St. Augustine describes it as a hoard, `a storehouse for countless images,' `a vast immeasurable sanctuary,' and `vast cloisters.' . . . Employing memory, we are possessed by it. Its powers are familiar enough. It terrorizes and heals. Bursting upon us unexpectedly, it knocks loose the underpinnings of self-knowledge so the plenitude it brings seems at once a paralyzing ignorance. It contains what the race has been and the imperial presence charges us to try, earnestly and futilely, to contain it.

Di Piero on poetry that "works": "The most commonly accepted notion in our time is that the work of the poet is not to make a thing of beauty but to produce a beautifully functioning thing. No civilization has been so made of like products, and none has articulated its powers so massively by means of machines. Two great lyric poets, Eugenio Montale and William Carlos Williams, have called the poem `a little machine.' . . . Our ordinary understanding of the poet's work, in other words, is much closer to techne, to the practice of a trade or the performing of a work operation. Poetry is neither diminished nor debased by the new model (though it is debased by the inauthenticity and professionalism the new model encourages) so long as it does not surrender its techtonic life, its complex and elusive thought-character, for this finally is what make it the must human of the arts."

"Di Piero's essays are similar to Susan Sontag's in that both writers attempt to instruct a broad segment of the American reading public about conceptual systems that challenge and enrich our ordinary ways of understanding social reality. Di Piero writes in the genre of the essay for the same kinds of reasons as Sontag, with the same cosmopolitan learning and the same brilliant intensity."--Emily Grosholz, Pennsylvania State University

Book Description Princeton University Press. Paperback. Condition: As New. An apparently unread copy in perfect condition. Dust cover is intact; pages are clean and are not marred by notes or folds of any kind. At ThriftBooks, our motto is: Read More, Spend Less. Seller Inventory # G0691014639I2N00

Book Description Princeton University Press, 1989. Condition: Good. A+ Customer service! Satisfaction Guaranteed! Book is in Used-Good condition. Pages and cover are clean and intact. Used items may not include supplementary materials such as CDs or access codes. May show signs of minor shelf wear and contain limited notes and highlighting. Seller Inventory # 0691014639-2-4

Book Description Princeton University Press, Princeton, NJ, 1989. Paperback. First Ed thus; unstated. Near Fine in Wraps: shows only the most minute indications of use; binding square and secure; text clean. Just a hint of wear to extremities; mildest rubbing. Very close to 'As New'. NOT a Remainder. NOT a Book-Club Edition. NOT an Ex-Library copy. 8vo. 258pp. First Ed thus; unstated. Academic Press Paperback. In this remarkable collection of essays, poet and translator W. S. Di Piero draws us toward fresh encounters with literary artists from both sides of the Atlantic--Dante, Keats, Leopardi, Whitman, Pound, William Carlos Williams, Pavese, Sartre, William and Henry James, and others--as well as with filmmakers Robert Altman and Michelangelo Antonioni. Di Piero is a skillful and fervent interpreter of the productive tension between Europe and America. He compels our attention not only to the "passionate interrogations of history and memory" but to enthusiasm--"the celebrative stare, the pause for revelation, the waiting.". Seller Inventory # 39607