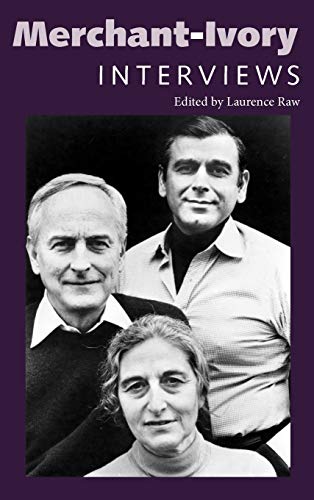 Merchant-Ivory: Interviews gathers together for the first time interviews made over the past five decades with director James Ivory (b. 1928), producer Ismail Merchant (1936-2005), and screenwriter Ruth Prawer Jhabvala (b. 1927). Beginning with their earliest work in India, and ending with James Ivory's last film, The City of Your Final Destination (2009), the book traces their career, while offering valuable insights into their creative filmmaking process. The volume serves as a corrective to the prevailing critical orthodoxy attached to Merchant-Ivory's work, which tends to regard them as being solely concerned with historically accurate costumes and settings. As independent filmmakers, they have developed an idiosyncratic approach that resists facile classification. Merchant-Ivory have insisted on maintaining their independence.

More importantly, this book shows how Merchant-Ivory have always taken considerable care in casting their films, as well as treating actors with respect. This is a deliberate policy, designed to bring out one of the triumvirate's principal thematic concerns, running throughout their work--the impact of the "clash of cultures" on individuals. Partly this has been inspired by their collective experiences of living and working in different cultures. They do not offer any answers to this issue; rather they believe that their task is simply to raise awareness; to make filmgoers conscious of the importance of cultural sensitivities that assume paramount significance in any exchange, whether verbal or nonverbal.

Interviews with the team that created the films Howard?s End, Mr. and Mrs. Bridge, The Remains of the Day, The White Countess, and The City of Your Final Destination, among many others