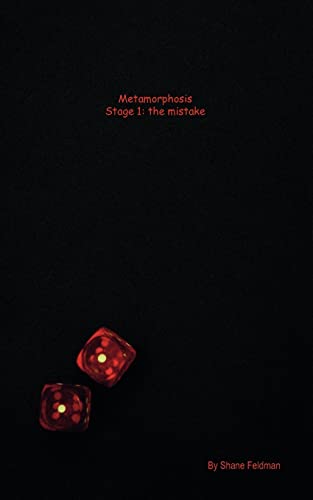 Synopsis: From the author of burn: A Bipolar Memoir and Seven Original Shorts comes the fictional novel Metamorphosis/Stage 1: The Mistake. The first part of a coming of age novel.

"Shane Feldman was born in Boston on February 3, 1980 and presently resides in Cambridge, Massachusetts. His life has been a constant test to overcome adversity. At an early age psychologists evaluated him. The evaluations indicated that he was an extremely intelligent, perceptive and sensitive child with severe learning difficulties, anxiety and early signs of depression.

Eventually Shane left public school to be in an environment that encouraged expressing his creative intelligence. He transferred in the seventh grade. He attended private school grades seven through eleven. In the fall of the eleventh grade, he had to be hospitalized at McLean, a psychiatric institution.

After being hospitalized Shane continued his education and received his high school diploma from Beacon High School, a special needs school. Upon completion of his high school education, he was accepted at a prestigious university where he has completed several of his short stories. During the course of his writing career he has had the opportunity to work along side such writers as William G Tapply, Leigh Steinberg, and Jonathan Cole. Three of Shane's poems have been published in internationally distributed books.

In August of 2001 following a substance induced manic episode Shane was diagnosed as bipolar. The following year he shared the details of a traumatic childhood. Another manic episode resulted in a more specific diagnosis of bipolar A Typical type, PTSD (Post Traumatic Stress Disorder).

In 2002 Shane also received an award from a special needs school where he worked with young children with severe psychological and behavioral disorders."