Items related to Metroburbia: The Anatomy of Greater London 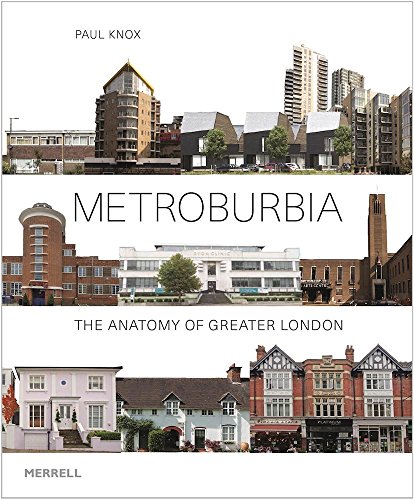 Metroburbia: The Anatomy of Greater London

London’s suburbs are home to many thousands of people who travel into the centre every day to work, but they also house many thousands who rarely find a reason to do so. They contain all the essential infrastructure for the city, too, including airports, offices, shopping centre, factories and warehouses. Outer London is therefore both metropolitan and suburban at the same time it is Metroburbia. In this book Paul Knox examines the architectural history and development of London’s suburbs, and celebrates their surprising variety and organized structure, refuting the common claim that they are monotonous or amorphous.

The first chapter, The Foundations of Metroburbia, explains the foundation and development of Metroburbia and looks at how topography and geology influenced the siting of the villages that would become part of Greater London. The River Thames, of course, is one of London’s most important and well-known structural elements, and in this chapter Knox examines how its meanders and bends have produced distinct patterns of settlement and development. He also describes in detail the seven distinctive sectors of London, which are (running clockwise from the west) the Thames Valley, Northwest London, North London, the Lea Valley, Northeast London, the Thames Estuary and South London. Finally, he looks at how early settlements, country estates and royal palaces shaped Metroburbia, and how the increase in roads and industry consolidated the development of what would become suburbia.

Chapter 2, Pattern-book London, looks at Victorian and Edwardian suburbs the first developments to be given that name. The building booms and their effect on employment in the city, and the difference in style and purpose between the various suburbs, are discussed, and Knox also examines the effects of immigration and industrialization on the city’s housing requirements. He also describes the genesis of the parks, cemeteries and garden villages that now provide such valuable green space for Londoners, and the creation of the impressive industrial, civic and institutional buildings that are still striking parts of the city’s infrastructure.

Chapter 3, Inter-war Suburbia: Metro-Land and the Universal Plan, describes the acceleration of building projects between the wars and the beginning of the transition from Edwardian society to the modern welfare state. The term Metro-Land’, introduced by the Metropolitan Railway Company in the early twentieth century, gives the chapter its title, and describes the expansion of residential London along the route of the Underground lines into Buckinghamshire. The effect of widespread car ownership is discussed, and the various housing styles Stockbroker Tudor, Suburban Moderne, the mansion block, and so on are described. The fourth chapter, Secular Reformation and Modernism, covers the thirty years from the end of the Second World War, during which time the welfare state brought about radical changes to life in London and the architecture of the city.

Chapter 5, Counter-Reformation, describes the changes wrought on the country by the new neo-liberal agenda, as the welfare state was overtaken by a market-driven economy that fostered free-for-all development. By this time Metroburbia had spread outwards to incorporate Chelmsford, Southend-on-Sea, Maidstone, Guildford, Reading and Luton. This was an era of radical new infrastructure projects from the rise of the suburban shopping centre to the construction of the new Thames Barrier and huge increases in house prices. The regeneration of the Isle of Dogs into the Docklands commercial area is one of the most high-profile developments of the era, but infill house-building and small-scale environmental developments were also produced, and social housing regenerated. Finally, the last chapter, Megapolitan Futures, explores the various theories about the capital’s future and conjectures about the shape of the city in the twenty-first century.

Paul L. Knox is a University Distinguished Professor and former Dean of Architecture and Urban Studies at Virginia Tech. His recent books include The Atlas of Cities (Princeton UP, 2014); Palimpsests: Biographies of 50 City Districts (Birkhäuser, 2012); Cities and Design (Routledge, 2010); London: Architecture, Building and Social Change (Merrell, 2015)