Items related to THE SON 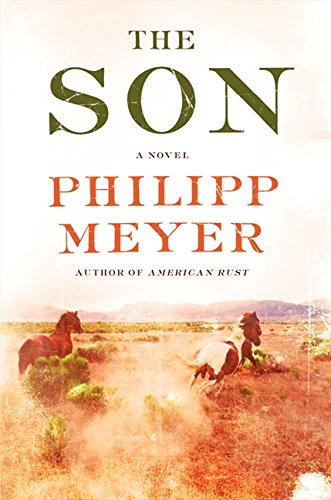 Signed by author on title page in black fountain ink. A sweeping multi-generational novel that illuminates the violence and enterprise of the American West by tracing a Texas familyżs passage from lethal frontier perils to immense oil-boom wealth. THE SON was a nominated finalist for the 2014 Pulitzer Prize in Fiction (won by Donna Tartt for THE GOLDFINCH) Meyer is also the autho of AMERICAN RUST. THE SON is the basis of the new AMC television series starrimg Pierce Brosnan, Henry Garrett, and Paola Nuńez. New, unread, first edition, first printing, opened only for signing, in fine, mylar-protected dust jacket.*Packed carefully and shipped in a box to insure arrival in mint condition. {Not remainder-marked or price-clipped} L113/BUND. Bookseller Inventory # 020569

Philipp Meyer, the acclaimed author of American Rust, returns with The Son: an epic of the American West and a multigenerational saga of power, blood, land, and oil that follows the rise of one unforgettable Texas family, from the Comanche raids of the 1800s to the to the oil booms of the 20th century.

Harrowing, panoramic, and deeply evocative, The Son is a fully realized masterwork in the greatest tradition of the American canon—an unforgettable novel that combines the narrative prowess of Larry McMurtry with the knife-edge sharpness of Cormac McCarthy.

An Amazon Best Book of the Month, June 2013: In 1859, Eli McCullough, the 13-year-old son of Texas pioneers, is captured in a brutal Comanche raid on his family's homestead. First taken as a slave along with his less intrepid brother, Eli assimilates himself into Comanche culture, learning their arts of riding, hunting, and total warfare. When the tribe succumbs to waves of disease and settlers, Eli's only option is a return to Texas, where his acquired thirsts for freedom and self-determination set a course for his family's inexorable rise through the industries of cattle and oil. The Son is Philipp Meyer's epic tale of more than 150 years of money, family, and power, told through the memories of three unforgettable narrators: Eli, now 100 and known simply as "the Colonel"; Eli's son Peter, called "the great disappointment" for his failure to meet the family’s vision of itself; and Eli's great-granddaughter Jeanne Anne, who struggles to maintain the McCullough empire in the economic frontier of modern Texas. The book is long but never dull—Meyer's gift (and obsession) for historical detail and vernacular is revelatory, and the distinct voices of his fully fleshed-and-blooded characters drive the story. And let there be blood: some readers will flinch at Meyer's blunt (and often mesmerizing) portrayal of violence in mid-19th century Texas, but it’s never gratuitous. His first novel, 2009's American Rust, drew praise for its stark and original characterization of post-industrial America, but Meyer has outdone himself with The Son, as ambitious a book as any you’ll read this year--or any year. Early reviewers call it a masterpiece, and while it's easy to dismiss so many raves as hyperbole, The Son is an extraordinary achievement. --Jon Foro