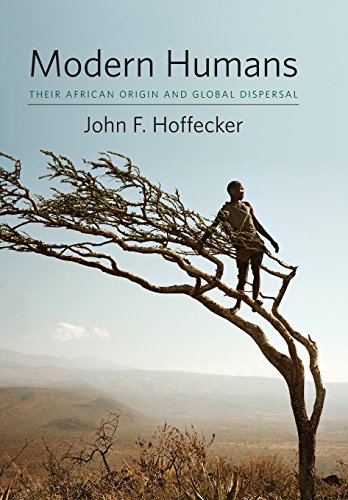 Modern Humans is a vivid account of the most recent―and perhaps the most important―phase of human evolution: the appearance of anatomically modern people (Homo sapiens) in Africa less than half a million years ago and their later spread throughout the world. Leaving no stone unturned, John F. Hoffecker demonstrates that Homo sapiens represents a “major transition” in the evolution of living systems in terms of fundamental changes in the role of non-genetic information.

Modern Humans synthesizes recent findings from genetics (including the rapidly growing body of ancient DNA), the human fossil record, and archaeology relating to the African origin and global dispersal of anatomically modern people. Hoffecker places humans in the broad context of the evolution of life, emphasizing the critical role of genetic and non-genetic forms of information in living systems as well as how changes in the storage, transmission, and translation of information underlie major transitions in evolution. He also draws on information and complexity theory to explain the emergence of Homo sapiens in Africa several hundred thousand years ago and the rapid and unprecedented spread of our species into a variety of environments in Australia and Eurasia, including the Arctic and Beringia, beginning between 75,000 and 60,000 years ago. This magisterial work will appeal to all with an interest in the ever-fascinating field of human evolution.

John F. Hoffecker is a fellow of the Institute of Arctic and Alpine Research at the University of Colorado, Boulder. He has conducted field research in Alaska and Eastern Europe and is the author of Desolate Landscapes: Ice-Age Settlement in Eastern Europe (2002); A Prehistory of the North: Human Settlement of the Higher Latitudes (2005); (with Scott A. Elias) Human Ecology of Beringia (Columbia, 2007); and Landscape of the Mind: Human Evolution and the Archaeology of Thought (Columbia, 2011).