Items related to Monsters in the Machine: Science Fiction Film and the... 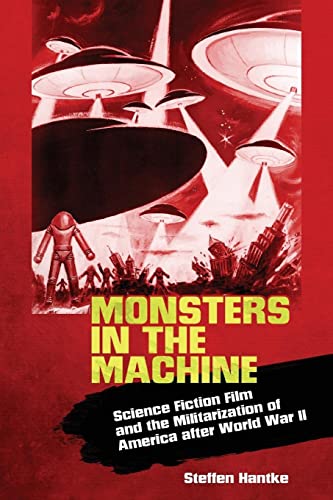 Monsters in the Machine: Science Fiction Film and the Militarization of America after World War II

During the 1950s and early 1960s, the American film industry produced a distinct cycle of films situated on the boundary between horror and science fiction. Using the familiar imagery of science fiction--from alien invasions to biological mutation and space travel--the vast majority of these films subscribed to the effects and aesthetics of horror film, anticipating the dystopian turn of many science fiction films to come. Departing from projections of American technological awe and optimism, these films often evinced paranoia, unease, fear, shock, and disgust. Not only did these movies address technophobia and its psychological, social, and cultural corollaries; they also returned persistently to the military as a source of character, setting, and conflict. Commensurate with a state of perpetual mobilization, the US military comes across as an inescapable presence in American life.

Regardless of their genre, Steffen Hantke argues that these films have long been understood as allegories of the Cold War. They register anxieties about two major issues of the time: atomic technologies, especially the testing and use of nuclear weapons, as well as communist aggression and/or subversion. Setting out to question, expand, and correct this critical argument, Hantke follows shifts and adjustments prompted by recent scholarly work into the technological, political, and social history of America in the 1950s. Based on this revised historical understanding, science fiction films appear in a new light as they reflect on the troubled memories of World War II, the emergence of the military-industrial complex, the postwar rewriting of the American landscape, and the relative insignificance of catastrophic nuclear war compared to America's involvement in postcolonial conflicts around the globe.

A vital and engaging look at the political contexts surrounding 1950s sci-fi films. Hantke showcases the importance of neglected films like Invasion U.S.A. and I Married a Monster from Outer Space while expertly tracing new patterns across the genre. (Blair Davis, author of The Battle for the Bs: 1950s Hollywood and the Rebirth of Low-Budget Cinema)

With admirable scope and lucidity, Monsters in the Machine insightfully analyzes sci-fi films of the postwar period to expose the cultural politics and political ethos of an era dominated by the aura of World War II and the nuclear shadow it cast over Henry Luce's 'American Century.' Providing rich touchstones for the major tensions and contradictions that informed the grotesque mechanisms of the Cold War, Monsters in the Machine should be required reading for any course on American Cold War culture. (Alan Nadel, author of Containment Culture: American Narratives, Postmodernism, and the Atomic Age and Flatlining on the Field of Dreams: Cultural Narratives in the Films of President Reagan's America)