Items related to Moving Zen: One Mans Journey to the Heart of Karate... 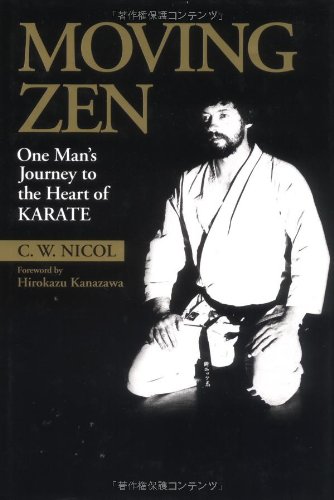 Moving Zen: One Mans Journey to the Heart of Karate (Bushido--The Way of the Warrior)

Title: Moving Zen: One Mans Journey to the Heart of...

A classic story of one man's confrontation with the self through Karate.

In 1962 at age twenty-two, C. W. Nicol left Wales to study Karate in Japan. He quickly found that the study of the martial art engaged his whole being and transformed his outlook on life. Moving Zen is the multifaceted story of a young man who arrived in Japan to study the technique of, and spirit behind, Karate.

Joining the Japan Karate Association, or Shotokan, Nicol discovered that Karate, while extremely violent, also called for politeness and a sense of mutual trust and responsibility. He learned that the stronger the Karateka, the more inclined he was to be gentle with others. Those who have gained a measure of skill but have not yet achieved spiritual maturity are the dangerous practitioners. Studying kata, Nicol came to realize that these forms are, in essence, moving Zen and that the ultimate goal of all the martial arts is tranquility.

Through the help of many gifted teachers, C. W. Nicol gained his black belt, and moved progressively closer to his goal of tranquility. His story, Moving Zen, was first published in 1975 and has achieved the status of a modern classic.

C. W. NICOL is the author of Harpoon, among other English titles, and over seventy books in Japanese. He is a seventh dan in the Shotokan Karate International Federation. He has made fifteen expeditions to the Arctic and has served as a game warden in Ethiopia. Born in Wales, he is now a citizen of Japan. He is vice principal of a college that trains environmental field workers.