Items related to Mushrooms of the Redwood Coast: A Comprehensive Guide...

Home Noah Siegel Mushrooms of the Redwood Coast: A Comprehensive Guide to the ...
Stock Image 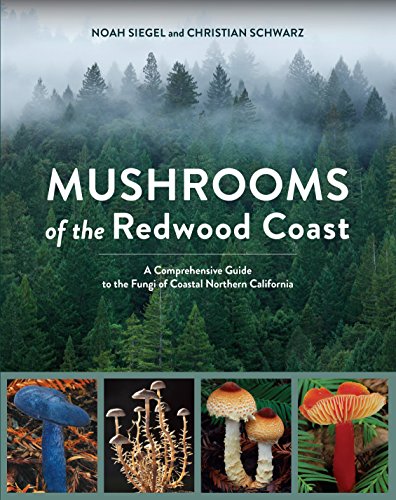 Mushrooms of the Redwood Coast: A Comprehensive Guide to the Fungi of Coastal Northern California

Title: Mushrooms of the Redwood Coast: A ...

A comprehensive and user-friendly field guide for identifying the many mushrooms of the northern California coast, from Monterey County to the Oregon border.

Mushrooms of the Redwood Coast will help beginning and experienced mushroom hunters alike to find and identify mushrooms, from common to rare, delicious to deadly, and interesting to beautiful. This user-friendly reference covers coastal California from Monterey County to the Oregon border with full treatments of more than 750 species, and references to hundreds more. With tips on mushroom collecting, descriptions of specific habitats and biozones, updated taxonomy, and outstanding photography, this guide is far and away the most modern and comprehensive treatment of mushrooms in the region. Each species profile pairs a photograph with an in-depth description, as well as notes on ecology, edibility, toxicity, and look-alike species. Written by mushroom identification experts and supported by extensive field work, Mushrooms of the Redwood Coast is an indispensable guide for anyone curious about fungi.

NOAH SIEGEL's field mycology skills are extensive – he has spent two decades seeking, photographing, identifying, and furthering his knowledge about all aspects of macrofungi. He has hunted for mushrooms throughout the United States and Canada, as well as on multiple expeditions to New Zealand and Australia.
He is one of the premier mushroom photographers in the nation, having won numerous awards from the North American Mycological Association (NAMA) photography contest. His technique and attention to detail are unrivaled, arising from a philosophy of maximizing utility for identification purposes while maintaining a high degree of aesthetic appeal.
His photographs have appeared on the covers and have been featured in articles of multiple issues of FUNGI Magazine and Mushroom the Journal, the primary mushroom enthusiast magazines in the United States, numerous mushroom books, as well as NAMA and other club publications.
He is past president of the Monadnock Mushroomers Unlimited, (MMU) a mushroom club based out of Keene, NH, and is an active member of the Humboldt Bay Mycological Society and the Fungus Federation of Santa Cruz.
Noah travels and lectures extensively across America, following the mushrooms.
CHRISTIAN SCHWARZ is a naturalist interested in the diversity of living organisms in general, but the seemingly endless forms (whether grotesque, bizarre, or sublime) of fungi in particular stoke his curiosity. He spends most of his time teaching about natural history, collecting and photographing mushrooms, assembling an exhaustive mycoflora for Santa Cruz County (www.scmycoflora.org), and exploring wilderness around the world. He is particularly interested in the role of citizen scientists in the future of ecological and taxonomic research.