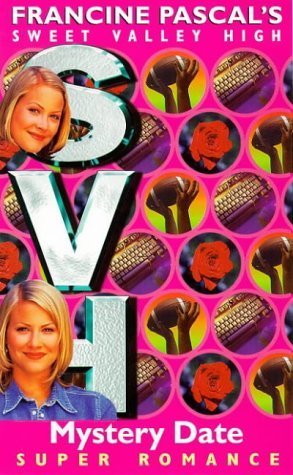 Synopsis: Are Olivia's romantic fantasies about to come true?

Lately, Olivia Davidson has felt lonely.  Sweet Valley has a major lack of funky, artistic people like herself.  So she's kept busy chatting with cool, imaginative guys in Internet chat rooms.  One guy in particular could be her perfect match--he's sweet, sincere, and a poet.  Olivia doesn't want to admit it, but she might be falling in love with a guy she's never met!

Ken Matthews only uses his Internet account to check football scores and stats.  But when he accidentally links to an artists' chat room, he meets an amazing girl who challenges the creative side he never knew he had.  And speaking of challenges, she wants to meet him in person!  What will happen when she finds out he's really a football jock and not the poet he's been pretending to be?

Excerpt. © Reprinted by permission. All rights reserved.: The gym at Sweet Valley High was stuffy, with a faint odor of sweat socks. Elizabeth Wakefield felt hot and sticky from dancing. But when the disc jockey announced a Beach Boys tune, her boyfriend grabbed her hand and yanked her back onto the dance floor.

"But it's 'California Girls'!" Todd Wilkins protested over the sound of the electronic organ. 'We can't not dance to this tune!"

"We'll dance to the next one," Elizabeth promised. "I need a soda right now."

"They wrote this song about you, Liz," Todd said. "You have an obligation!"

"Todd, this is southern California," she reminded him. "Every female in this room is a California girl!"

"But nobody looks the part the way you do!" he said, squeezing her hands.

"Except my sister," Elizabeth said, but she gave up and relaxed into the step. She loved dancing with Todd, to any music.

Todd rolled his eyes at the reference to Elizabeth's identical twin sister, Jessica. Elizabeth ignored his reaction. About the only thing Todd and Jessica had in common was that they were two of Elizabeth's favorite people. Elizabeth twirled under his outstretched arm and nearly bumped into another girl being similarly whirled. For a split second she thought she'd come close to colliding with her reflection in a mirror. But it was only Jessica, who seemed to have appeared by magic as soon as Elizabeth thought about her.

The sisters were used to being called the perfect California girls. With their blond hair, golden tans, and blue-green eyes the color of the Pacific Ocean, the description was inevitable.

Despite the twins' identical faces and size-six figures, their friends seldom mixed them up. Jessica's sun-streaked hair was exactly the same shade as her sister's, but unlike Elizabeth, who always arranged her hair in practical styles, Jessica wore hers in loose, sexy waves. For the dance that Saturday night Elizabeth's hair was pulled back in elegant pearl-encrusted barrettes; Jessica's flew out around her face as she danced, wild and free.

Elizabeth favored simple makeup--that night she wore only a touch of lip gloss and a hint of brown mascara. Her outfit for the informal dance--a floral-print dress a few inches above the knee--was flattering but not flashy. Jessica, on the other hand, had been turning heads all evening in her white spaghetti-strap minidress. Her eyes were dramatically lined with sultry shadow, and she wore a deep red lipstick.

"I wish they all could be California girls!" Jessica sang, gleefully off-key, as Danny Porter spun her under his upraised arm. "They're playing our song, Liz!" she called to her sister. "Isn't this awesome?"

"I thought you didn't like oldies, Jessica," Todd replied over the music. He watched Danny and Jessica for a moment and then maneuvered Elizabeth into a complicated "pretzel" sequence that left her dizzy.

'Well, I wouldn't be caught dead just listening to the Beach Boys," Jessica called back, eyeing the other couple's dance moves. "I mean, the newer the better, right? But dancing is different." She nodded to Danny, and they launched into a series of turns even more complex than Elizabeth and Todd's.

Todd responded by spinning Elizabeth until she had to clutch his shoulder to keep from toppling over. She was too tired to dance anymore, she decided, Beach Boys or not.

"You have to admit it, Liz," Todd said a little breathlessly. "As much as I hate to vote with Psycho Twin, this stuff is terrific to dance to!"

Jessica narrowed her eyes at the "psycho twin" reference but didn't comment on it, turning away from Todd pointedly to address her sister. "The Beach Boys are way cool for dancing," she said. "Unlike that depressing so-called music the DJ was playing a few minutes ago!"

Jessica and Todd never agreed about much of anything, but it was clear they were both having a great time. Elizabeth sighed. She liked the Beach Boys. But the folk ballad her sister had hated was one of Elizabeth's favorite new songs, a heartfelt lament about the destruction of the rain forests.

"Look around you, Liz!" Jessica exclaimed, as if to prove her point. "All the coolest kids are on the dance floor now. It's jock city!"

Elizabeth glanced around. Sure enough, almost every student who'd danced to the slow ballad now stood near the refreshments table or around the edges of the room. They'd been replaced on the dance floor by some of the most popular kids at Sweet Valley High, especially those from the athletic teams and cheerleading squad, as well as the cliques known as the snobs and the fashion queens.

Jessica was a cocaptain of the cheerleaders; Danny, whom she occasionally dated, was a quiet but cute wide receiver for the school football team. Nearby, Bruce Patman, one of the richest and--in Elizabeth's opinion--most stuck-up people at school, twirled his girlfriend, Pamela Robertson. Both were expert tennis players with conservative taste in just about everything.

Tall, blond quarterback Ken Matthews was dancing with Lila Fowler, Jessica's wealthy and stylish best friend. Elizabeth knew Ken wasn't interested in Lila. But she was glad to see him back in the center of Sweet Valley High's social scene. He finally seemed to have recovered from his painful breakup with Jessica a few months earlier.

Even Todd counted as a jock--after all, he was the star of the school basketball team. Elizabeth sighed. Her own extracurricular interests centered around Sweet Valley High's student newspaper, the Oracle. Suddenly she felt out of place on the dance floor. That's silly, she scolded herself. These kids were her friends. Nobody cared that she didn't play a varsity sport. She pushed away her doubts and concentrated on having a good time.

"I don't know about the 'coolest' kids, but this song sure has the athletic crowd dancing the night away," she said to Todd. "Is there a cosmic connection between being a school athlete and liking the Beach Boys?"

"Nothing cosmic about it," Todd said. "Actually it's part of the tryout for team sports. If you can't sing the lyrics to at least one Beach Boys tune, you're on the bench." His brown eyes twinkled in the sexy way that always made Elizabeth's insides melt. She forgot about the music and the other couples and leaned against him as if it were a slow dance, relishing the feel of his hard, muscular chest against her cheek and the woodsy smell of his aftershave.

Book Description Bantam Children 02/04/1998, 1998. Condition: Very Good. This book is in very good condition and will be shipped within 24 hours of ordering. The cover may have some limited signs of wear but the pages are clean, intact and the spine remains undamaged. This book has clearly been well maintained and looked after thus far. Money back guarantee if you are not satisfied. See all our books here, order more than 1 book and get discounted shipping. . Seller Inventory # 7719-9780553506686

Book Description Bantam Juvenile, 1998. Paperback. Condition: Used; Good. **SHIPPED FROM UK** We believe you will be completely satisfied with our quick and reliable service. All orders are dispatched as swiftly as possible! Buy with confidence!. Seller Inventory # mon0000655913

Book Description Bantam Children 02/04/1998, 1998. Condition: Very Good. Shipped within 24 hours from our UK warehouse. Clean, undamaged book with no damage to pages and minimal wear to the cover. Spine still tight, in very good condition. Remember if you are not happy, you are covered by our 100% money back guarantee. Seller Inventory # 6545-9780553506686

Book Description Paperback. Condition: Very Good. The book has been read, but is in excellent condition. Pages are intact and not marred by notes or highlighting. The spine remains undamaged. Seller Inventory # GOR003481288