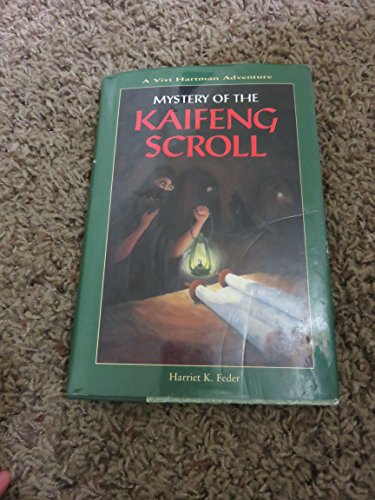 Mystery of the Kaifeng Scroll: A Vivi Hartman Adventure

Synopsis: When Vivi Hartman's mother suddenly disappears while they are in Istanbul, Turkey, the fifteen-year-old befriends an Arab girl and sets out to find her mother, encountering a mystery involving an ancient Torah scroll along the way.

From Booklist: Gr. 6^-9. This sequel to Mystery in Miami Beach: A Vivi Hartman Adventure (1992) finds 15-year-old Vivi jetting off to Istanbul, Turkey, for a summer visit with her mother. Vivi is concerned when Mom fails to meet the plane, sending a young Arab girl named Shari in her stead. Vivi learns that her mother has left Istanbul to authenticate an ancient scroll that may or may not be a Torah taken to China during the 1400s. Later, Vivi overhears a whispered conversation that convinces her that Mom has been kidnapped by Shari's brother, a Palestinian terrorist. Using her considerable linguistic talents as well as her knowledge of the Torah, Vivi unravels the mystery and rescues her mother. Feder portrays Vivi as a strong, savvy, and thoroughly modern young woman who takes her strict Jewish upbringing seriously. Universal themes of trust and independence combine with the specific issue of conflict between Arabs and Israelis to make this a timely and appealing mystery. Kay Weisman

1. Mystery of the Kaifeng Scroll : A Vivi Hartman Adventure

2. Mystery of the Kaifeng Scroll : A Vivi Hartman Adventure

Book Description Lerner Publishing Group. Library Binding. Condition: Very Good. A copy that has been read, but remains in excellent condition. Pages are intact and are not marred by notes or highlighting, but may contain a neat previous owner name. The spine remains undamaged. At ThriftBooks, our motto is: Read More, Spend Less. Seller Inventory # G0822507390I4N00

4. Mystery of the Kaifeng Scroll: A Vivi Hartman Adventure

6. Mystery of the Kaifeng Scroll

Book Description Lerner Publications Company, Minneapolis, 1995. Hardcover. Condition: Fine. Dust Jacket Condition: Fine. First edition. Fine in fine dustwrapper. Hardcover and dustwrapper good copy except for light rubbing at spine ends and corners. Please Note: This book has been transferred to Between the Covers from another database and might not be described to our usual standards. Please inquire for more detailed condition information. Seller Inventory # 135157