Items related to NATASHA: And Other Stories 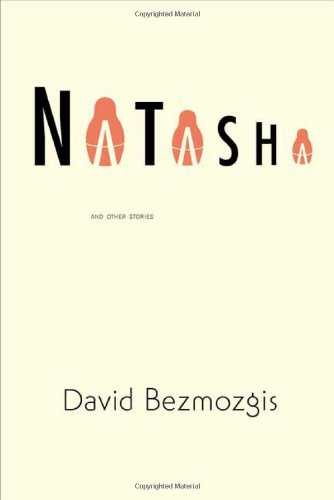 NATASHA: And Other Stories

Signed by author on title page in black fountain ink. NATASHA: And Other Stories was the winner of the 2004 Commonwealth First Book Prize and was, among other honors, shortlisted for both the 2004 Guardian First Book Award (UK) and Governor General's Awards for Literature. Bezmozgis is since the author of two novels, THE FREE WORLD and, most recently, the widely-praised THE BETRAYERS. Basis of the 2017 film NATASHA by David Bezmozgis, starring Sasha K. Gordon and Alex Oserov, which was nominated for two Canadian Screen Awards (Canada's Oscar equivalent) for Best Adapted Screenplay (David Bezmozgis) and for Best Actress in a Leading Role (Sasha K. Gordon) (Bezmozgis is also a co-producer of the smash hit BBC-Canada show 'Orphan Black,' starring the amazingly versatile actress, Tatiana Maslany.) As new, first edition, first printing, in fine, mylar-protected dust jacket. {Not remainder-marked or price-clipped} BUND. Bookseller Inventory # 019567

Title: NATASHA: And Other Stories

Few readers had heard of David Bezmozgis before last May, when Harper's, Zoetrope, and The New Yorker all printed stories from his forthcoming collection. In the space of a few weeks, these magazines introduced America to the Bermans--Bella and Roman and their son, Mark--Russian Jews who have fled the Riga of Brezhnev for Toronto, the city of their dreams.

Told through Mark's eyes, and spanning the last twenty-three years, Natasha brings the Bermans and the Russian-Jewish enclaves of Toronto to life in stories full of big, desperate, utterly believable consequence. In "Tapka" six-year-old Mark's first experiments in English bring ruin and near tragedy to the neighbors upstairs. In "Roman Berman, Massage Therapist," Roman and Bella stake all their hopes for Roman's business on their first, humiliating dinner in a North American home. Later, in the title story, a stark, funny anatomy of first love, we witness Mark's sexual awakening at the hands of his fourteen-year-old cousin, a new immigrant from the New Russia. In "Minyan," Mark and his grandfather watch as the death of a tough old Odessan cabdriver sets off a religious controversy among the poor residents of a Jewish old-folks' home.

The stories in Natasha capture the immigrant experience with a serious wit as compelling as the work of Jhumpa Lahiri, Nathan Englander, or Adam Haslett. At the same time, their evocation of boyhood and youth, and the battle for selfhood in a passionately loving Jewish family, recalls the first published stories of Bernard Malamud, Harold Brodkey, Leonard Michaels, and Philip Roth.

David Bezmozgis became an overnight star when he published stories in the holy trinity of American magazines for fiction lovers: The New Yorker, Harper's, and Zoetrope. With the publication of his first book, Natasha, he has been compared to Chekhov and Philip Roth, and the comparison is more than just promotional copy. Natasha follows the experiences of a family of Russian Jews who settle in Toronto and set about reinventing themselves. The loosely connected stories are narrated by the son, Mark, who attempts to understand not only his new world but also his parents. As the book progresses, his growth into the frustrations of adolescence mirrors his family's disappointments as they attempt to escape their old lives in the immigrant ghetto and create new identities. Bezmozgis calls the stories "autobiographical fiction," as they are largely inspired by his own family's past, but make no mistake, these are fully realized works of literature, complete with an attention to language and an eye for detail that invoke the best of minimalist writing. Bezmozgis doesn't reinvent the form here--he sticks to traditional themes such as the search for self and cultural dislocation--but he tells his stories with a grace and quiet sensitivity that's so rare these days it's practically an endangered species.

And there are a couple of literary masterpieces in Natasha. The title story, which relates Mark's sexual experimentation with a cousin by marriage during a summer spent dealing drugs, manages to be both a touching coming-of-age tale and one of the freshest inversions of the suburban dream in years. "The Second Strongest Man," a story of the reunion of Mark's family with a Russian weightlifter, manages to conflate the decline of the Russia with the emptiness of North American life in its tale of aging men whose time has passed them by. Bezmozgis divides his time between Canada and the U.S., but Natasha is international in the scope of its subjects--modern Russia, Toronto's immigrant communities, Judaism, various translations of the American dream. It's the literature of globalization, and Bezmozgis has proven himself to be a global writer. --Peter Darbyshire, Amazon.ca