Items related to NECROPATH: Book One of the Bengal Station Trilogy 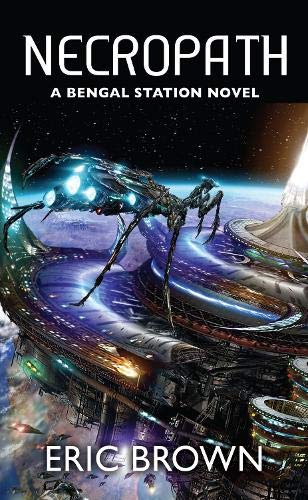 NECROPATH: Book One of the Bengal Station Trilogy

Signed by author on title page in black fountain ink. Author of KETHANI. Bengal Station: an exotic spaceport that dominates the ocean between India and Burma. Jaded telepath, Jeff Vaughnm, is employed by the spaceport authorities to monitor incoming craft for refugees from other worlds. When he discovers a sinister cult that worships a mysterious alien god, he's drawn into a deadly investigation. Not only must he attempt to solve the murders, but he must also save himself from the psychopath out to kill him. New, Advance Uncorrected Proof, in plain wraps. L49. Bookseller Inventory # 11889

Title: NECROPATH: Book One of the Bengal Station ...

1.  This is classic SF from the author of HELIX.

2.  Will appeal to mystery fans, as well as a core science fiction readership.

3.  Will appeal to fans of Richard Morgan and Alastair Reynolds.

4.  This novel has generated interest from movie production companies.

5.  Author will be promoting at conventions and events, including BEA.

Science fiction meets crime noir, as Jeff Vaughan, jaded telepath, employed by the spaceport authorities on Bengal Station, discovers a sinister cult that worships a mysterious alien god. We follow Vaughan as he attempts to solve the murders and save himself from the psichopath out to kill him. This is Eric Brown's triumphant return to hard SF.

Eric S. Brown is the author of World War of the Dead, Season of Rot, and Barren Earth. Some of his past works include Cobble, Madmen’s Dreams, and Unabridged Unabashed and Undead: The Best of Eric S. Brown, among others. His short fiction has been published hundreds of times and he was featured as an expert on the walking dead in the book, Zombie CSU. Eric lives in NC with his loving wife, Shanna, and his son, Merrick.