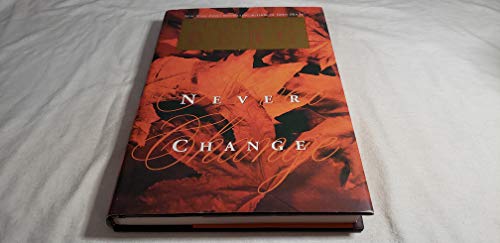 Resigned to her life alone, fifty-one-year-old spinster Myra Lipinsky endures her isolation by immersing herself in her career as a visiting nurse, in which role she is reunited with Chip Reardon, the onetime golden boy she adored from afar in high school, who has returned to his New England hometown to live while he deals with an incurable illness. 150,000 first printing.

Elizabeth Berg has a single great gift as a novelist. She creates heroines who are stuck and unhappy, yet deeply sympathetic. This may seem like an easy trick to pull off, but it's not. Think about it: usually when a character is mired in a problem--especially a problem stemming from her own reluctance to change, or fear of commitment, or lack of identity--the reader is ready within a few dozen pages to shout, "Pull yourself together!" and set the book aside. In contrast, Berg's characters seem like enjoyable challenges: problems with actual solutions.

In Never Change, Berg uses her gift to great advantage. Middle-aged Myra Lipinsky describes herself as "the one who sat on a folding chair out in the hall with a cigar box on my lap selling tickets to the prom, but never going." And despite a flourishing career as a visiting nurse, she feels as much an also-ran as ever. As the novel begins, in fact, high school seems to be rearing its ugly head again: Chip Reardon, the heartthrob of Myra's youth, has returned to town to live with his parents. Chip is dying from a brain tumor, and Myra becomes his nurse. Berg is not the kind of writer to lay bare the unsettling power dynamics of such a situation. Instead, Chip and Myra become friends and, well, learn how to love each other. It's a testament to the author's strong sense of character that we actually believe--and what's more, care about--Myra's emergence from her emotional cocoon. And the book is full of nice details, like this snapshot of children being read to at a library, "rising up on their knees to see the pictures, resting their hands unselfconsciously on those ahead of them so that they would not lose their balance." Such careful observations, recounted in Myra's voice, make us believe that she is a character worth knowing, and worth saving. --Claire Dederer