Items related to THE NUDIST ON THE LATE SHIFT, And Other True Stories...

Home Bronson, Po. THE NUDIST ON THE LATE SHIFT, And Other True Stories of Silicon ...
Stock Image 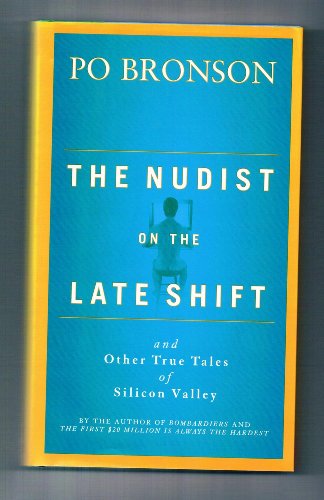 THE NUDIST ON THE LATE SHIFT, And Other True Stories of Silicon Valley.

Title: THE NUDIST ON THE LATE SHIFT, And Other True...

The Nudist on the Late Shift is the true story of a new generation at the proving point of their lives, written by the most exciting and authentic literary voice to emerge from Silicon Valley, Po Bronson.

This is a defining portrait of young people in the whirl of an information revolution and an international gold rush. Masses of entrepreneurs and tech wizards, immigrants and investors, dreamers and visionaries, are heading west to seek their fortune and a new destiny. In Bronson, they have found their troubadour.

Already hailed by The Village Voice Literary Supplement as "the most complete and empathetic portrait of the Valley so far," The Nudist on the Late Shift establishes Bronson as the first author to capture the spirit of this new mecca. Recently chosen by the VLS as one of 1999's "Writers on the Verge," Bronson has spent the past decade searching Silicon Valley for the best stories, several of which have been published in Wired. Now he has woven those stories together, taking us inside the world of the newcomers, brainiacs, salespeople, headhunters, utopians, plutocrats, and innovators who are transforming our culture.

Writes the VLS: "Bronson evocatively portrays the overwhelming unpredictability of life in the Valley: getting fired can be part of daily life. But with a zero unemployment rate, the wounded don't stay that way for long. Bronson is at his best describing this radically shifting environment, where everyday folk with the right idea and the stamina stand to make millions in a couple of years, skipping rungs on the career ladder at a mind-boggling pace. Bronson recognizes that Silicon Valley's boom is made up of small explosions, and The Nudist puts us at ground zero."

Perhaps more than anywhere else, Silicon Valley in the latter part of the 20th century has come to represent the essence of the American dream. Its economy has resembled the various rushes and booms of the 1800s. The Valley is a unique place in a unique time, where just about anyone with a good idea, an aptitude for hard work, and a boatload of luck has a chance to make it big--really big. In The Nudist on the Late Shift, Po Bronson intends to capture the spirit of the Valley, leading us through a series of vignettes that takes us from a "near brush with sudden wealth" to a $400 million buyout; from life on the edge with a group of Java programmers to the plight of a futurist writer with the looming deadline for a 9,000-word article. For Bronson, the appeal of the Valley is this:

Every generation that came before us had to make a choice in life between pursuing a steady career and pursuing wild adventures. In Silicon Valley, that trade-off has been recircuited. By injecting mind-boggling risk into the once stodgy domain of gray-suited business, young people no longer have to choose. It's a two-for-one deal: the career path has become an adventure into the unknown.

Like Tracy Kidder's Soul of a New Machine, what makes Bronson's book work is a talent for narrative. He presents compelling stories about those who make it--for example, Ben Chiu (Killerapp.com, C/NET) and Sabeer Bhatia (Hotmail)--as well as those whom we'll never hear of again: the database salesman working on the "hockey stick" at the close of the quarter and the "kiss-ass entrepreneur" who's taken up COBOL programming to make ends meet. The Nudist on the Late Shift is for anyone who has wondered what life on the modern frontier is like--and for those who are already there, the reflection might be revealing. --Harry C. Edwards