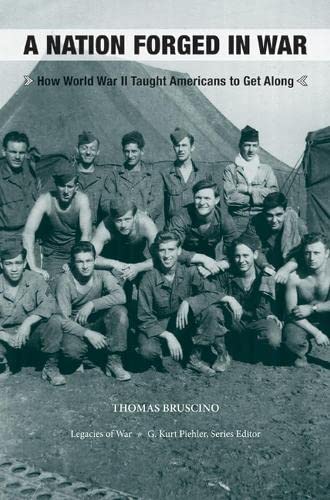 A Nation Forged in War: How World War II Taught Americans to Get Along (Legacies of War)

Title: A Nation Forged in War: How World War II ...

World War II shaped the United States in profound ways, and this new book--the first in the Legacies of War series--explores one of the most significant changes it fostered: a dramatic increase in ethnic and religious tolerance. A Nation Forged in War is the first full-length study of how large-scale mobilization during the Second World War helped to dissolve long-standing differences among white soldiers of widely divergent backgrounds.

Never before or since have so many Americans served in the armed forces at one time: more than 15 million donned uniforms in the period from 1941 to 1945. Thomas Bruscino explores how these soldiers' shared experiences--enduring basic training, living far from home, engaging in combat--transformed their views of other ethnic groups and religious traditions. He further examines how specific military policies and practices worked to counteract old prejudices, and he makes a persuasive case that throwing together men of different regions, ethnicities, religions, and classes not only fostered a greater sense of tolerance but also forged a new American identity. When soldiers returned home after the war with these new attitudes, they helped reorder what it meant to be white in America.

Using the presidential campaigns of Al Smith in 1928 and John F. Kennedy in 1960 as bookend events, Bruscino notes a key change in religious bias. Smith's defeat came at the end of a campaign rife with anti-Catholic sentiment; Kennedy's victory some three decades later proved that such religious bigotry was no longer an insurmountable obstacle. Despite such advances, Bruscino notes that the growing broad-mindedness produced by the war had limits: it did not extend to African Americans, whose own struggle for equality would dramatically mark the postwar decades.

Extensively documented, A Nation Forged in War is one of the few books on the social and cultural impact of the World War II years. Scholars and students of military, ethnic, social, and religious history will be fascinated by this groundbreaking new volume.

"Thomas Bruscino's important study helps to demystify the experience of World War II in America by showing that the war fostered greater toleration among many white ethnic and religious groups in America but was also marked by continued racism and questionable moral practices on the part of the generation that fought."
-- John Bodnar, Chancellor's Professor of History, Indiana University