Items related to National Geographic. Around the World in 125 Years.... 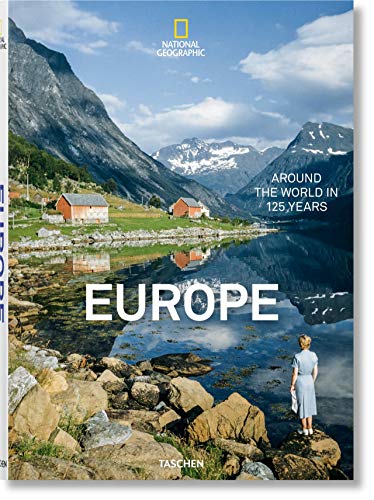 National Geographic. Around the World in 125 Years. Europe

Title: National Geographic. Around the World in 125...

For over five generations, National Geographic magazine has dazzled and educated its readers with incredible photography and gripping stories spanning the four corners of the earth and the deepest oceans. Inspired by our monumental Around the World in 125 Years, this volume curates over 200 captivating images, sourced directly from the National Geographic historical archives, including almost 40 new photographs. Traversing travel, history, culture, social documentary, and conservation, this compendium is in equal parts a breathtaking homage to the spirit and diversity of Europe, and a unique tribute to the world’s most famous photography magazine.National Geographic pioneered the aesthetic of the photo essay, while continually pushing the medium's technical boundaries, to both entertain and enlighten its millions of loyal readers. Our trans-continental journey through time and space spans across all corners of Europe, from the snow-capped peaks of Finland to the frothy foam parties of Ibiza, from the serene blue waters of the Greek Islands to the Lascaux cave paintings of Southern France. We witness the hair-rising eruption of Surtsey in Iceland, where lightning rips through the volcano’s clouds in otherworldly hues of purple; lose ourselves among flowers and babushka-wrapped heads in Russia’s Volgograd marketplace; and tread carefully behind climbers across a crevasse in the Bernese Oberland. Along the way, we absorb the culture of the some of the world’s greatest cities including Paris, Rome, Berlin, London, Vienna, Stockholm, Moscow, and many others.National Geographic: Europe leaves no stone unturned in its ultimate voyage through the precious jewels and hidden facets of the European continent. From evocative early black-and-white pictures to autochromes, from the golden age of Kodachromes to digital, this is both a celebration of the power of photography and a unique trip to the soul of Europe.

Reuel Golden is former editor of the British Journal of Photography. His TASCHEN titles include Capitol Records, Mick Rock: The Rise of David Bowie, both London and New York Portrait of a City books, Andy Warhol. Polaroids, The Rolling Stones, Her Majesty, Football in the 1970s, and the National Geographic editions.

Books2anywhere are an established bookseller who have been serving customers worldwide since 2000. With warehouses in the US and the UK, Books2anywhere have a huge range of titles to offer including old favourites and the latest best sellers.


Orders are shipped from either our US or UK warehouse within 2 working days. Delivery thereafter is between 4 and 14 business days. Please contact us if you have any queries about our services or products.