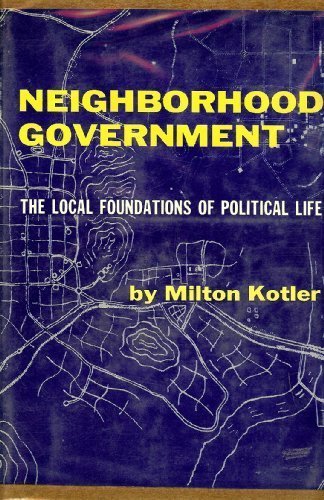 Synopsis: At a time of intense urban civil unrest in the United States, this classic text by Milton Kotler was the first to forcefully demonstrate how governance on the neighborhood level could allow Americans to regain liberty and the right to govern their own lives. Kotler's original project showed how townsâ€”once independent but then later annexed by adjacent citiesâ€”became exploited by centralized downtown power. As relevant today as it was when originally published in 1969, Neighborhood Government continues to speak to American cities whose faces have been radically changed by immigration, urban sprawl, and communities fractured by pervasive economic and racial inequality.

With a new critical foreword by Terry L. Cooper that places the text within contemporary debates and a new foreword and afterword from the author, Neighborhood Government continues to be a vital work for anyone interested in the economic, social, and political health of American cities and the continuing struggle to increase community investment and control.

About the Author: Milton Kotler received his M.A. in political science and taught political science at the City College of Chicago. A political strategist and neighborhood organizer for twenty years in the 1960s and 70s, in 1982 Kotler organized Kotler Marketing Group (K.M.G.) to develop new funding sources and revenue programs for non-profit organizations. K.M.G. is a leading marketing strategy and practice company with corporate and non-profit clients throughout the world. For the past six years Kotler has focused his strategic activity in China where he works on urban and industrial development for Chinese municipal authorities. His company also provides strategic and tactical marketing support to Chinese companies to improve their business performance in Chinese and global markets.

Book Description Bobbs-Merrill Co, 1969. Condition: Good. A+ Customer service! Satisfaction Guaranteed! Book is in Used-Good condition. Pages and cover are clean and intact. Used items may not include supplementary materials such as CDs or access codes. May show signs of minor shelf wear and contain limited notes and highlighting. Seller Inventory # 0672507625-2-4

Book Description Bobbs-Merrill Co. Hardcover. Condition: GOOD. Has little wear to the cover and pages. Contains some markings such as highlighting and writing. Seller Inventory # 0672507625_abe_gd