Items related to Never Before, Never Again: The Autobiography of Eddie... 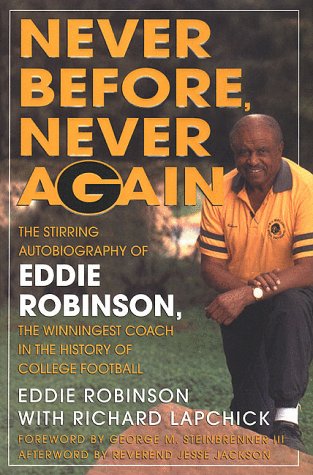 Never Before, Never Again: The Autobiography of Eddie Robinson

Franklin Roosevelt was America's President when Eddie Robinson coached his first game. Fifty-seven years later, Robison left Grambling as the winningest coach in the history of college football. Initially a coach for a segregated society, Eddie Robinson has helped football transcend race in the America he loves and treasures. Yet institutionalized racial barriers kept Robinson a secret from white America for more than 25 years until Howard Cosell did an ABC special on Grambling in the late 1960s. Outside of the world of sport, white America still barely knows him. In the African-American community, he is very likely the best-known coach in America. He is surely the most beloved.

Never Before, Never Again chronicles Coach Robinson's life and his time at Grambling in vivid detail. He overcame all those things that might have predicted that it was not possible for the son of a sharecropper and a domestic worker to become a success. He got a master's degree, became the president of the American Football Coaches Association, and helping thousands of young boys become outstanding men. More than wins, they may be his greatest legacy.

But as much as Coach Robinson's memoir is about sports, it's a social history history as well. The book is a lens through which readers can see the challeges and turmoil of the civil rights movements from the perspective of a sports figure who worked the playing fields of a black campus while caring deeply about the stakes and outcome of the struggle . This book places the hard-news events of the day in the time frame of the trails of Robinson's Grambling teams of that era. Also included are the thoughts of other coaches (both college and NFL) on Coach Robinson, as well as those of national leaders like Reverend Jesse Jackson, M.J. "Mike" Foster, the governor of Lousiana, and President Clinton.

Never Before, Never Again stands as lasting testimony to the work of a true American hero.

Grambling State's Eddie Robinson started coaching college football when FDR was in the White House and didn't stop until Bill Clinton's second term. Along the way, he racked up 408 victories, but his real legacy isn't in the stats. A black man coaching black athletes in the Deep South for 57 seasons, Robinson witnessed and took part in amazing changes in society and in his sport, battling prejudice and hatred to earn respect for himself and opportunity for his players. Never Before, Never Again plays gamely in both those arenas--society and sport--because it has to; for Robinson they are one and the same.

"I never thought that schools like LSU and Alabama would integrate," he can admit, aware that great performances by black athletes competing at those schools played a big part in their integration. Yet, amidst the upheavals of the '60s, he also knew that doing his job wasn't just about coaching football. He learned to harness that anger at the criticism hurled his way from more militant quarters: "I wasn't going to go out and hurt somebody or let one of my own get hurt to disprove that I was an Uncle Tom." Robinson proved his talents year in and year out, winning not just games and championships, but respect and admiration. He also helped change the face of his game in college and beyond, sending more than 200 players to the NFL, including Super Bowl MVP Doug Williams. The candor of Never Before, Never Again is as refreshing as it is revealing; the story itself is pure inspiration. --Jeff Silverman


Orders usually ship within 2 business days. Shipping costs are based on books weighing 2.2 LB, or 1 KG. If your book order is heavy or over sized, we may contact you to let you know extra shipping is required.