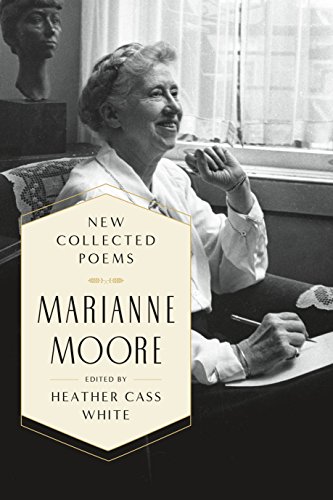 The landmark oeuvre of Marianne Moore, one of the major inventors of poetic modernism, has had no straight path from beginning to end; until now, there has been no good vantage point from which to see the body of her remarkable work as a whole. Throughout her life Moore arranged and rearranged, visited and revisited, a large majority of her existing poetry, always adding new work interspersed among revised poems. This makes sorting out the complex textual history that she left behind a pressing task if we mean to represent her work as a poet in a way that gives us a complete picture. New Collected Poems offers an answer to the question of how to represent the work of a poet so skillful and singular, giving a portrait of the range of her voice and of the modernist culture she helped create.

William Carlos Williams, remarking on the impeccable precision of Moore’s poems, praised “the aesthetic pleasure engendered when pure craftsmanship joins hard surfaces skillfully.” It is only in New Collected Poems that we can understand her later achievements, see how she refashioned her earlier work, and get a more complete understanding of her consummate craftsmanship, innovation, and attention to detail. Presented and collected by Heather Cass White, the foremost scholar of Moore’s work, this new collection at last allows readers to experience the untamed force of these dazzling poems as the author first envisioned them.

Marianne Moore (1887–1972) was an American poet, critic, editor, and translator, greatly admired for her formal innovations and startling vision. Her poetry received many honors, including the Dial Award, the National Book Award, the Pulitzer Prize, and the Bollingen Prize. Her poetry books include Observations and New Collected Poems.