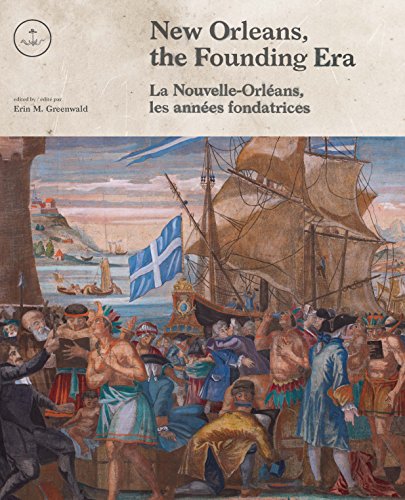 On the occasion of the tricentennial of the founding of New Orleans, this groundbreaking exhibition catalog celebrates the diversity of the city's earliest populations.

New Orleans, the Founding Era gathers contributions from eight leading scholars of the French Atlantic World and features an illustrated checklist of artifacts from public and private collections across France, Spain, Canada, and the United States. This dual-language publication from The Historic New Orleans Collection explores the ideas, peoples, and material cultures that shaped one of the most complex and challenging colonization projects in the Americas.

Erin M. Greenwald curated the landmark exhibition New Orleans, the Founding Era in honor of the city's tricentennial. As curator at The Historic New Orleans Collection, she was project director of the National Endowment for the Humanities-funded traveling exhibition Purchased Lives: The American Slave Trade from 1808 to 1865. She is the editor of A Company Man: The Remarkable French-Atlantic Voyage of a Clerk for the Company of the Indies and author of Marc-Antoine Caillot and the Company of the Indies in Louisiana: Trade in the French Atlantic World. Greenwald holds a PhD in history from the Ohio State University. She is currently curator of programs at the New Orleans Museum of Art.

Henry Colomer is a French documentary filmmaker and translator. He has directed some thirty films, including various portraits of artists and writers (L'exile, Iddu, Ricercar, Vies metalliques), as well as a number of documentaries about the upheavals of the twentieth century (Monte Verita, Sous les drapeaux). Colomer has won several awards (Best Historic Documentary, Festival of History Films, Pessac, 1998, 2008; Focal International Award, London, 2010). His latest documentary, Des voix dans le choeur--Eloge des traducteurs, is a tribute to poetry translators. He has recently translated The Lifespan of a Fact by John D'Agata and Jim Fingal, as well as various essays by J. B. Jackson.