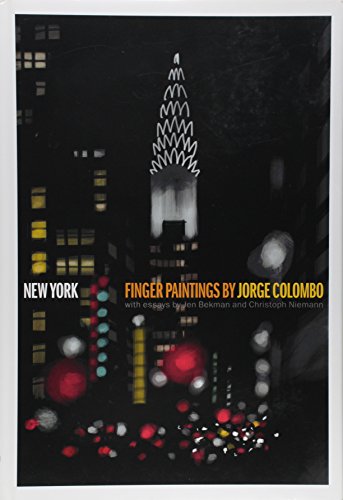 Synopsis: If New York City is a state of mind, then Jorge Colombo captures the metropolis' thoughts like no other. Colombo's beautiful illustrations of New York City have graced the cover of The New Yorker several times, brilliantly depicting icons such as silhouetted rooftop water towers, the illuminated Chrysler Building at night, Fifth Avenue in the snow, or the ubiquitous hot dog stand. All of the images were finger painted on location on an iPhone; to passerby walking by the artist, he simply appeared to be sending text messages or reading a very long email. This sophisticated volume presents one hundred of his best pieces in full colour, accompanied by his recollections and comentaries about each location. Every scene is unmistakably New York: familiar, grand, timeless, yet filtered by modern, cutting-edge technology. Immediately recognizable to native New Yorkers, but also perfect for anyone who admires the Big Apple, this is a monograph of an artist and of a city.

About the Author: Jorge Colombo, a Portuguese-born illustrator, designer, and photographer, has lived in the USA for more than twenty years, and he has been depicting American urban landscape ever since. His lushly rendered scenes are currently finger painted from life, on location, and using an iPhone, bringing the idea of traditional outdoor easel painting into the 21st century. Regularly released as 20x200.com limited edition prints, his images have appeared several times on the cover of The New Yorker, and there is a blog devoted to his work, Finger Paintings, on newyorker.com. His view of the city and his art are influenced by Woody Allen movies, Edward Hopper paintings, and Arthur Getz illustrations, among others. His first cover for The New Yorker, in June 2009, was the first time a smartphone-created image made the cover of a magazine.

Christoph Niemann is an illustrator, graphic designer, and author of several books, including I LEGO N.Y, who writes and illustrates the New York Times blog Abstract City.

Book Description Paperback. Condition: Very Good. The book has been read, but is in excellent condition. Pages are intact and not marred by notes or highlighting. The spine remains undamaged. Seller Inventory # GOR004711091

Book Description Paperback. Condition: Good. The book has been read but remains in clean condition. All pages are intact and the cover is intact. Some minor wear to the spine. Seller Inventory # GOR009083198

Book Description Paperback. Condition: Fair. A readable copy of the book which may include some defects such as highlighting and notes. Cover and pages may be creased and show discolouration. Seller Inventory # GOR009694844

Book Description Chronicle Books, 2011. Condition: Good. Shows some signs of wear, and may have some markings on the inside. Seller Inventory # GRP78500762

Book Description Chronicle Books, 2011. Condition: Good. A+ Customer service! Satisfaction Guaranteed! Book is in Used-Good condition. Pages and cover are clean and intact. Used items may not include supplementary materials such as CDs or access codes. May show signs of minor shelf wear and contain limited notes and highlighting. Seller Inventory # 0811879259-2-4