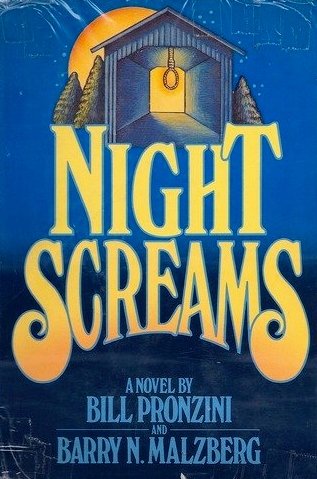 About the Author: Bill Pronzini is simply one of the masters. He seems to have taken a crack at just about every genre: mysteries, noirish thrillers, historicals, locked-room mysteries, adventure novels, spy capers, men's action, westerns, and, of course, his masterful, long-running Nameless private detective series, now entering its fourth decade, with no signs of creative flagging. He's also ghosted several Brett Halliday short stories as Michael Shayne for Mike Shayne's Mystery Magazine, and has managed to collaborate with such fellow writers as John Lutz, Barry Wahlberg, Collin Wilcox and Marcia Muller. Still, if he never ventured into fiction writing, his non-fiction work, as both writer and editor, would still earn him a place in the P.I. genre's Hall of Fame. Besides his two tributes to some of the very worst in crime fiction (what he calls "alternative classics"), Gun in Cheek and Son of Gun in Cheek, and one on western fiction (entitled Six Gun in Cheek, naturally), he's the co-author (with Marcia Muller) of 1001 Midnights. The Mystery Writers of America have nominated him for Edgar Awards several times and his work has been translated into numerous languages and he's published in almost thirty countries. He was the very first president of the Private Eye Writers of America, and he's received three Shamus Awards from them, as well as its Lifetime Achievement Award in 1987. Barry N. Malzberg is the author of more than 30 Sci-Fi novels and more than 250 Sci-Fi short stories, as well as thrillers and erotic novels under his own name and various pseudonyms. He won the John W. Campbell Memorial Award for his 1972 novel, Beyond Apollo.

Book Description Playboy Enterprises, Incorporated. Hardcover. Condition: Good. A copy that has been read, but remains in clean condition. All pages are intact, and the cover is intact. The spine may show signs of wear. Pages can include limited notes and highlighting, and the copy can include previous owner inscriptions. An ex-library book and may have standard library stamps and/or stickers. At ThriftBooks, our motto is: Read More, Spend Less. Seller Inventory # G0872235254I3N10

Book Description Playboy Enterprises, Incorporated. Hardcover. Condition: Fair. A readable copy. All pages are intact, and the cover is intact. Pages can include considerable notes-in pen or highlighter-but the notes cannot obscure the text. At ThriftBooks, our motto is: Read More, Spend Less. Seller Inventory # G0872235254I5N00