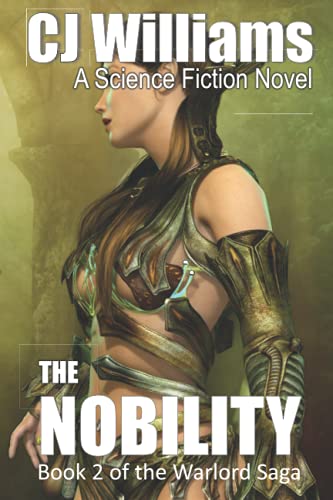 Synopsis: Lucas Blackburn leaves Carrie Faulkner in command of the Alliance while he is absent. Her orders? Destroy as many of the murderous Bakkui as possible! Her latest mission results in over three hundred million kills! Unfortunately, they were all friendly. After such a spectacular failure, the Warlord relieves her of duty. But still, the war goes on. Someone needs to investigate the source of the unstoppable Bakkui menace. WHO VOLUNTEERS FOR A SUICIDE MISSION?Going deep behind enemy lines is a suicidal mission at best. Devastated by her failure, Carrie decides she's the perfect fit for the job. With help from Sadie, Carrie begins her search in the heart of the old Nobility empire. She discovers nothing is what she and the Warlord have been led to believe. The King of the First Family is dead and the Second Family's King Kkoli is responsible. Even worse, Kkoli may be the one behind the Bakkui.ABANDONED BEHIND ENEMY LINES, CARRIE RISKS IT ALLCarrie initiates a covert search across Nobility space for proof that links the Second Family to the Bakkui. Too late she discovers they were already looking for her. An unexpected confrontation reveals a complicated situation that even Kkoli doesn't understand. And the threat extends to all the way to Earth itself.The Warlord Saga is an epic science fiction adventure that spans the Galaxy. The Commander: Book One of the Warlord Saga introduced Lucas Blackburn and his battle against the Bakkui. In The Nobility: Book Two of the Warlord Saga Carrie, Luke's protégé, discovers the Nobility is being shattered from within. To save it from ruin, she strikes into the heart of Bakkui, making promises that Luke must keep to save humanity.In The Warlord: Book Three of the Warlord Saga, both Carrie and Luke face new antagonists, some of them, disturbingly, of their own making.The Descendent: Book Four of the Warlord Saga (coming soon) takes what the Warlord has created to an entirely different level. It means breaking Luke's harshest decree, and forces him to give up what he loves above all else.

Book Description CreateSpace Independent Publishi, 2016. Paperback. Condition: Good. Minor Shelfwear. Good condition is defined as: a copy that has been read but remains in clean condition. All of the pages are intact and the cover is intact and the spine may show signs of wear. The book may have minor markings which are not specifically mentioned. Most items will be dispatched the same or the next working day. Seller Inventory # mon0009604477