Items related to North: The New Nordic Cuisine of Iceland 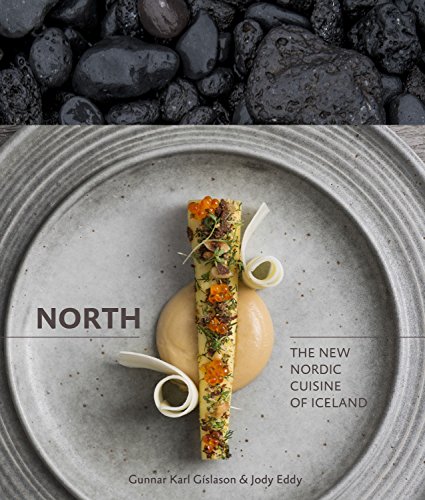 An unprecedented look into the food and culture of Iceland, from Iceland's premier chef and the owner of Reykjavík's Restaurant Dill.

Iceland is known for being one of the most beautiful and untouched places on earth, and a burgeoning destination for travelers lured by its striking landscapes and vibrant culture. Iceland is also home to an utterly unique and captivating food scene, characterized by its distinctive indigenous ingredients, traditional farmers and artisanal producers, and wildly creative chefs and restaurants.

Perhaps no Icelandic restaurant is as well-loved and critically lauded as chef Gunnar Gíslason’s Restaurant Dill, which opened in Reykjavík’s historic Nordic House in 2009. North is Gíslason’s wonderfully personal debut: equal parts recipe book and culinary odyssey, it offers an unparalleled look into a star chef’s creative process. But more than just a collection of recipes, North is also a celebration of Iceland itself—the inspiring traditions, stories, and people who make the island nation unlike any other place in the world.

Chef GUNNAR GISLASON opened Restaurant Dill in Reykjavik's historic Nordic House in 2009. His contemporary cooking celebrating Iceland's pristine ingredients and artisanal producers has garnered international acclaim and media. Dill has been nominated for the Nordic Prize and has earned numerous accolades including Iceland's restaurant of the year. In his spare time, Gislason can be found foraging with his children for ingredients to stock his restaurant's pantry, or salmon fishing in one of Iceland's glacial rivers.

JODY EDDY is the author of Come In, We're Closed, which profiled the staff meals of 25 of the world's best restaurants. A graduate of The Institute of Culinary Education in Manhattan, she is the former editor of Art Culinaire. She first visited Dill in 2009 and has been a devoted disciple of Gislason's cooking philosophy ever since.