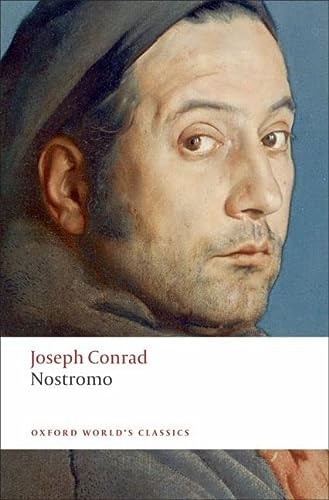 Former library book; may include library markings. Used book that is in clean, average condition without any missing pages. Seller Inventory # GRP38185933

Synopsis:
One of the greatest political novels in any language, Nostromo reenacts the establishment of modern capitalism in a remote South American province locked between the Andes and the Pacific. In the harbor town of Sulaco, a vivid cast of characters is caught up in a civil war to decide whether its fabulously wealthy silver mine, funded by American money but owned by a third-generation English immigrant, can be preserved from the hands of venal politicians. Greed and corruption seep into the lives of everyone, and Nostromo, the principled foreman of the mine, is tested to the limit.
Conrad's evocation of Latin America--its grand landscapes, the ferocity of its politics, and the tenacity of individuals swept up in imperial ambitions--has never been bettered. This edition features a new introduction with fresh historical and interpretative perspectives, as well as detailed explanatory notes which pay special attention to the literary, political, historical, and geographical allusions and implications of the novel. A map, a chronology of the narrative, a glossary of foreign terms, and an appendix reprinting the serial ending all complement what is sure to be the definitive edition of this classic work.

About the Series: For over 100 years Oxford World's Classics has made available the broadest spectrum of literature from around the globe. Each affordable volume reflects Oxford's commitment to scholarship, providing the most accurate text plus a wealth of other valuable features, including expert introductions by leading authorities, voluminous notes to clarify the text, up-to-date bibliographies for further study, and much more.
About the Author:
Jacques Berthoud has edited four Conrad novels, including Lord Jim for OWC. He is the author of Joseph Conrad, the Major Phase (1978), and of numerous essays on Elizabethan drama, Laurence Sterne, W. B. Yeats and others. Mara Kalnins is the General Editor of the Conrad editions in OWC,and the
editor of Victory in the series.